On an anthology of BR Ambedkar's speeches, Thus Spoke Ambedkar 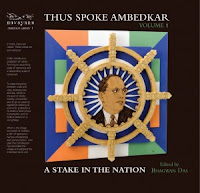 One of the most suggestive paradoxes of India’s transformation from colony to democratic republic was that one of the founding fathers of Indian democracy – the architect of its constitution, and an authority on the science of government – was also one of its greatest skeptics. For most of his life Bhimrao Ambedkar (1891-1956) was engaged, even as the Indian National Congress tried to orchestrate the movement that would yield to all Indians freedom from foreign rule, in a struggle merely to secure for the untouchables of India a guarantee of “some of the most elementary rights to which human beings are entitled.”

It is in these two avatars – constitutional expert, and as a personification of Dalit self-assertion – that Ambedkar is remembered today. And as a new edition of some of his best speeches, Thus Spoke Ambedkar, shows, his real achievement was not just in articulating the bitterness and sorrow of people who laboured under racial discrimination, but in formulating a solution for the problem that was not impassioned and emotive but strategic and constitutional, using the tools of democracy and the fledgling subjects of democracy to fulfil the promise of democracy. The oppression of Dalits (or “the Depressed Classes”, as they were called for much of his watch) by higher-caste Hindus was not so much a social problem, Ambedkar thought, as it was a political problem, to be resolved by careful political organisation and political representation.

Mahatma Gandhi, Ambedkar’s compatriot and frequent antagonist on issues concerning the Dalits and Hindu society, ambitiously held, on the subject of British dominion, that mere independence from foreign rule was merely a beginning, and that real swaraj would only ensure when each person realised his or her potential, and on the subject of caste oppression, that Dalits were inescapably a part of Hindu society, and that the caste order was not in itself perverse, but rather decadent. Ambedkar, meanwhile, was making the more modest but nevertheless invaluable point that political democracy was a farce when not accompanied by social and economic democracy, and hence that independent India would offer "a life of contradictions" on a much more elemental level than that imagined by Gandhi. The caste order and caste consciousness had to be eradicated, not reformed.

Yet, as much as he thought that Dalits had many grievances that found no ear in either the corridors of power or society at large, this highly qualified lawyer and thoughtful democrat was a staunch advocate of “the diffusion of constitutional morality” through Indian society as the solution for pervasive Indian ills. As these speeches show, Ambedkar hoped fervently that Indian democracy would provide the space and the legal means for Dalits to grow in self-respect and equality, and yet was frequently disenchanted by what was actually granted.

The speeches collected in Thus Spoke Ambedkar, Vol. 1 by one of his students and followers, Bhagwan Das (author of the memoir In Pursuit of Ambedkar), cover a span of about twenty-five years in his career from 1930 onwards. They give us a sense not of the avuncular Ambedkar we know (or think we know), but of a more fiery and often inconsistent Ambedkar on the move, trying to work out the best position not just on the issue of caste struggle but also labour, capitalism, foreign rule, domestic political formations, and constitutional architecture. The sites and occasions where they were delivered are very diverse, from a meeting of the railwaymen belonging to the Depressed Classes (“I am glad,” says Ambedkar, “that we have met today more as workers than as untouchables”) to the chambers of Parliament. Their emphases, inevitably, are not consistent: Ambedkar veered towards Marxism in his youth and made many skeptical pronouncements about the efficacy of parliamentary democracy, but gradually reversed these leanings as he grew older and finally came to be the very face of constitutional democracy.

Many of the thoughts expressed here carry an uncanny relevance today, such as Ambedkar's criticism of the motivations underlying the basic gesture of electoral politics, the vote. “The majority in India is a communal majority and not a political majority,” observes Ambedkar. “In India the majority is born; it is not made. A political majority is not a fixed or a permanent majority. It is a majority which is always made, unmade, and remade. A communal majority is a permanent majority fixed in its attitude.” And if the majority organises itself in this unshakable way in a democracy, Ambedkar concludes, the minority has no option but to itself organise itself on similar lines, which is what explains his repeated emphasis on separate representation for Dalits.

Of course, as Ambedkar himself understood, this was at best only a partial solution to the problem. The challenge of how to integrate into the mainstream by asserting, as a first step, one’s separateness continues to vex the politics of reservation today. As Sunil Khilnani argues in a recent piece, "From Representative Democracy", that considers the addition of political reservations for women to an electoral system that already includes reservations for scheduled castes and scheduled tribes: "...[C]onceding the principle of quotas and reservations in the electoral process, in whatever form, serves ultimately to entrench identities, and fragments efforts to build a community of individual citizens. While the principle serves expedient purposes, long-term it undermines both unity and individuality."

Khjlnani wonders if "we too are becoming a little intellectually lazy about our version of democracy", but that is not a criticism that can be made of Ambedkar, who was always conscious of how dissent and grievance had to be fired by discipline ("The urge for self-realisation in the downtrodden classes," he says in a speech made to the Constituent Assembly in 1949, "must not be allowed to devolve into a class struggle or class war.") In the absence of a major biography, one looks forward to the publication of the three remaining volumes of speeches in this series, as also the re-issue of Ambedkar’s works The Annihilation of Caste and Pakistan or Partition of India by the same publisher, Navayana, for a fuller sense of the vision of this most constructive of Indian skeptics. A catalogue of Navayana's books on caste issues is here.

Thus Spoke Ambedkar, while a reissue of the first of four volumes of Ambedkar's speeches compiled by Bhagwan Das, is freshly and cogently annotated by the publisher, S. Anand, who is sometimes even more acerbic than Ambedkar is, particularly on the subject of Gandhi. Anand has an essay, "From Equalisation To Annihilation – And Beyond", in a special issue of Himal Southasian this month on the theme of "The Future of Caste".

And two old posts: "The art of oratory, and the great speeches of modern India", on two anthologies of Indian oratory; and "On Vinod George Joseph's Hitchhiker", a powerful fictional exploration of a youth floating through both rural and urban life always tagged by his caste.
Posted by Chandrahas at 9:44 AM

'avuncular': that's such a deliciously apt word. It almost reminds me of the http://savethewords.org/ initiative by Oxford. It's the kind that would feature there.

Very informative..dint know this much about the father of our constitution