At the BJP National Convention, and The Caravan 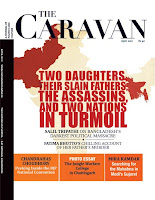 My apologies for not being able to put anything up on The Middle Stage for a few weeks now. I've been kept occupied by a long piece of reportage about my experiences at the Bharatiya Janata Party (BJP) national convention in Indore in February. The essay is called "Under The BJP's Big Tent", and it appears this month in the new issue of The Caravan, a monthly magazine of long-form narrative journalism focussed on Indian and South Asian politics, culture, and books.

And here is a se

lection of essays from the four issues of The Caravan since its relaunch in January this year: "One Hundred and Twenty Five Years of the Congress Party" by Ramachandra Guha; "A Missile In The Living Room" by Amitava Kumar; "The Road Back From Ayodhya" by Basharat Peer; "Bangladesh's Quest For Closure" by Salil Tripathi; "Searching For The Mahatma In Modi's Gujarat" by Mira Kamdar; "A Song Unto Itself", an essay on the Indian national anthem by Ananya Vajpeyi; "Book History in India" by Pradeep Sebastian (see also his essay on the new Tamil cinema); "The Sympathetic Ironist", an essay by the poet Anjum Hasan on the poetry of Eunice D'Souza; and "India and Enid Blyton" by Amy Rosenberg.

The magazine also publishes a long book excerpt every month, as also a photo-essay and fiction and poetry. An archive of articles from all four issues of 2010 is here.
Posted by Chandrahas at 2:37 PM

I read the essay and enjoyed it a lot, especially the parallel between your life and that of the BJP. While tracing your relationship with the BJP, of the initial interest to the later disillusionment and horror, you could have as well been writing about me: as you noted, the 2002 Gujarat riots and the BJP leadership's subsequent shielding of Modi ensured that for decades to come, young, forward-looking Indians would never again seriously consider BJP as an option.

The concluding sections of your essay, where you note how the "the tribalism and inhospitability of the ‘original formula,’" were at view at the convention, reaffirmed this thought.

[
As an aside: The scene of Modi howling "Mujhe Barood Chahiye!" seemed straight out of a Mithun Chakravarthi movie - indeed, one of Modi's feats is to reduce the national political discourse to a B-grade Hindi movie of the 1990s: its simplistic categorization of good and bad, the hero (Modi) saving the honor of the damsel in distress (Gujarat), the wimpish elders (Manmohan Singh) and the evil foreign forces (variously played by Sonia Gandhi and the Pakistanis).
]

My compliments on this wonderful reportage - it more than made for your prolonged absence on The Middle Stage.

Dear Bhushan - Many thanks for your kind words. I'm very happy you enjoyed the piece so much, because it took me a lot of time to figure out how to write it properly, and I wasn't very sure how it would be received.

I enjoyed your thoughts on Narendra Modi. Yes, we cannot have such a simplistic and melodramatic politics, but politics can become a form of entertainment, and there is a hungry audience for this kind of machismo in our country. It was good to be able to see all this live, with one's own eyes, rather than through the lens of a newspaper or television camera. I'm looking forward to doing more reportage of this kind.