Six New Poems From Around The World

The greatest pleasure of my ten weeks at the International Writing Program at the University of Iowa has been the chance to befriend a host of writers from around the world. A substantial number of them were poets, and over the course of an American fall we had plenty of leisure to discuss other poets we liked, issues of rhyme and rhythm, classical and modern poetry, and the unavoidable question of whether poetry is completely translatable.

As I leave America, I thought I'd put up on The Middle Stage poems by four IWP poets, from South Korea, Nigeria, the Netherlands, and Poland respectively, and then two recently published poems by Indian poets to make for a mix of Indian and world literature.

First up, I have in my hands a marvellous little book of poems by the South Korean poet Kim Sa-in, and from it I take a poem called “A Girl Hunched by the Fire Making Dumplings—I Will be her Man”, in a translation by Brother Anthony of Taize:

That girl hunched by the fire making dumplings—
I’ll end up wasting my life,
dependent on her ruddy, frozen hands.
That girl with nowhere to go,
only whimpers, crying alone, can’t run away.
She looks wretched, burned by the sun,
but her breasts and thighs must be whiter than milk.
I’ll wake up late, bleary‐eyed, sprawled over that body,
wipe the sleep from my eyes with my thick, drooping beard.
I’ll rush over to the gambling room in the tavern at dawn.
I’ll snoop around for leftover drinks,
flirt idly with the aging bar‐woman,
and once I’m drunk I’ll drop and spend another day out back.
I’ll toss into the void a goodbye that no one hears, “I’m going now,”
then stumble home carrying starlight on my back.
When ten to twenty years have gone by like that
I’ll have feebly spawned three or four children in her body.
After spawning them I’ll be helpless.
That young girl
only whimpers alone, nowhere to go.
The children will grow up rough as badgers.
Lying in a dirt‐floored room as dark as a cave,
my head resting on my arm,
I’ll watch the dry snow flutter in through a crack in the fogged window.
Noisily puffing bitter cigarettes, I’ll let some more years go by.
When that girl’s waist grows thick, once her tears have run dry
and her eyes blaze blue flames,
I’ll suddenly fall badly sick and make my bed under a rack.
I’ll hide the liquor she doesn’t want me to have and keep drinking.
When her hair is half white from years of hardship
I’ll finally expire ahead of her;
by then she won’t be able to laugh or cry.
She’ll smoke the bitter cigarettes I used to smoke,
learn to drink the liquor she couldn’t handle, learn to swear.

Would this not be quite a hopeless love?
Though I’m not sure if it makes any sense.

More of Kim Sa-in's poems are here, and some more translations of Korean poets by Brother Anthony here.

And here is the Nigerian poet Ismail Bala's very funny and acute "The Poetry of Others":


The Poetry of Others
by Ismail Bala

Is there no lull to it
the way they keep springing up in journals
then conclave in the inky chapel of an anthology?

You would think the daffodil would speak out,
but like the Muse it only inspires—then more of them appear.
Not even the authorities can put an end to it.

Just this morning, one accosted me like a beggar,
eyes squinting, difficult to ignore.
Another lunged out of the cover at me like a bully.

How can anybody despise them
when they hang about the hem of books
and humble themselves in our faces?

Perhaps I’m being mean, even frivolous.
It could have been the day at the circus
that left me this way—all the cast by the scripts—

as if only my poetry had the clout to be
and readers would come up from the heavens
in the morning to see them in cathedral of papery gods.

but for the moment I’m going to take a breather
through this nearly greyed place
that is my harmattan hidey-hole, my scriptorium,

and get my eyes off the poetry of others
even as they look down from the shelves
or laugh at my feigning in the guise of local clowns.

Some more of Bala's work is here and here and, should you be interested in having a look at the rhythms and sounds, if not the meanings, of his second language, some of his translations into Hausa of poems in English by other poets are here.

Next is the Albanian-Dutch poet Albana Shala and her very deft and twinkle-toed poem "Digital Pope", from her collection by the same name:

Let us choose another pope

A pope
we will never doubt
if he gazes with amusement at the nuns
if he dreams of getting under the covers with cardinal X
if he has betrayed the fatherland or his best friend
fifty years ago.

Some more poems by Shala can be found here.

Finally, here is the Polish poet Milosz Biedrzycki's "The Music Hour Hostess On Al-Jazeera Throws A Fit", in a translation by Frank L.Vigoda. Biedrzycki plays electric guitar very loudly and energetically in his spare time, and some of the "he/roic tenor" of that sound can be heard in this poem:

The Music Hour Hostess On Al-Jazeera Throws A Fit
by Milosz Biedrzycki
bonsoir, she always said politely
and bye-bye. in between, shukran habibi. And ana mabsuta
but it wasn’t that she was upset. quite the opposite.
Bedouin dreams of luxury, whizzing Lexuses,
water gurgling everywhere. girls belly
dancing at the very edge of the cognitive horizon
of this likable man with moustache and belly.
everything in its place. sweet ornaments
waving their hips just right. he sings, sings with he
roic tenor, a very powerful man. giving so much. and she?
suddenly a vampire, suddenly mabsuta
brazenly and wildly, legs all over the place.
at least the remote is safely stored
in the sofa. she? should know better.
she gets up, goes, clicks, off—

More poems by Biedrzycki can be found here and here.


And last, here are two poems recently published in the books pages of Mint Lounge. The first is "How Not To Age" by Tishani Doshi:


How Not To Age
by Tishani Doshi

It happens one night that the hurdles champ
of Loyola, Class of ’58, finds himself on the lawns
of a gentleman’s club – shoulders stooped,
bandy-kneed, unable to hear or digest sugar.
It happens his wife dies first, and his children
frequently think, Hypothetically, if dad had gone
first, mum would still have had things to do.
It happens that the man who threw the best parties,
the first person in town with disco lights,
psychedelic shirts, the works – now finds it difficult
to smile. And as if to prove this unhappy man
once had the capacity to dance, the moon skids over
his spectacles, does a little jig on the wintry expanse
of his head, eclipsing for a moment this night,
these stars, all the borrowed future ahead.

And the second is "A Folk Song" by Anupama Raju:

A Folk Song
by Anupama Raju

I was once your birthplace, your maternal village.
You grew as they fed my trees in this leafing village.

You built me a temple and invoked my blessing
Did you know I’d bring rain, me, your sleeping village?

The rain filled your stomach, you rose with the water,
poured into my empty nest, your weeping village.

When the floods came, you sang me songs and dried my tears
but my rivers wouldn’t nourish you seeping through this village.

You let go of my hand and cursed my love for you
chose a new mother instead of me, your heaving village.

Summer’s ripe with memories of you, my children
But don’t come back to me, to your seething village.

Also, my three-month sabbatical from book-reviewing duties in Indian literature is over, and from mid-December onwards you'll find my reviews in Mint Lounge again.
Posted by Chandrahas at 10:04 AM 2 comments:

Email ThisBlogThis!Share to TwitterShare to FacebookShare to Pinterest
Labels: literature in translation, poetry

Reading from Arzee the Dwarf in New York this Thursday 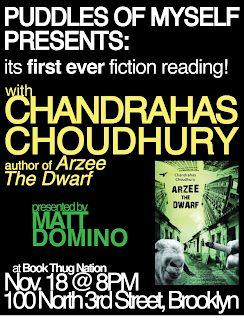 I'm reading in New York this Thursday at Book Thug Nation, a bookstore in Brooklyn. It would be lovely to see you.
Posted by Chandrahas at 11:20 AM 1 comment:

Email ThisBlogThis!Share to TwitterShare to FacebookShare to Pinterest
Labels: Arzee the Dwarf 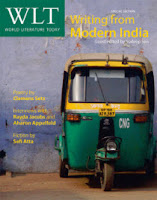 Last, for an interesting theoretical perspective on the idea of world literature, you might be interested in reading  "Goethe Coins A Phrase", the introduction to David Damrosch's book What Is World Literature?.
Posted by Chandrahas at 4:00 AM No comments: