Arzee the Dwarf in German 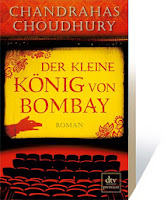 Arzee the Dwarf is published in Germany this month by Deutscher Taschenbuch Verlag in a translation by Kathrin Razum as Der kleine Konig von Bombay.

A Youtube trailer for the book is here. I watched it several times as, what with all the other work I've had to do between 2009 and 2012, I'd almost forgotten the story.

It's also available as a German audiobook.

Send word to your German friends -- or use it to improve your German!
Posted by Chandrahas at 12:36 AM 1 comment:

On Rajesh Parameswaran's I Am An Executioner

A compulsive and infectious narrative restlessness marks Rajesh Parameswaran’s first collection of short fiction, I Am an Executioner. Although tagged by the generic subtitle “Love Stories,” Parameswaran’s work demonstrates about the same relationship to traditional literary debuts as the insects in his strange and beautiful story “On the Banks of Table River (Planet Lucina, Andromeda Galaxy, AD 2319)” do to the earthlings who have colonized their planet.
Parameswaran prefers first-person narration to the more detached third person, but his storytellers are also wedded to a 21st-century experimentalism, continually uncaging themselves from realist fiction. From tigers and elephants to a man in a yellowing photograph and, most simply and touchingly, just a “being” in “On the Banks of Table River,” they form an unpredictable and often charming cavalcade, revealing both the particularity of what they perceive and the extent of what they misunderstand or simply miss. Raptly attentive to their own narratives, they gradually paint us into corners. We must peer around and above them before we can escape.
“The Agent does not try to understand what he is seeing,” we are told in the story called “Narrative of Agent 97-4702.” “That is a job for the Analyst.” Here a fiercely committed spy presents her report of a fairly ordinary surveillance operation, a report that begins to crackle when it becomes clear that she is also pursuing a chilling self-interrogation.
Parameswaran’s decision to avoid the convention of naming many of his characters and places serves to make the Agent, like other figures in this collection, powerfully allegorical. When the Agent eventually pleads guilty to “entertaining a mental state conducive to forming an intention to disclose protected information,” she plunges us into that nightmare world in which people need never be brought to trial because they have already tried and convicted themselves.
The companion to this story is “Demons,” in which a harassed wife is also seen entertaining a mental state. Having idly wished her annoying husband would just die, she suddenly finds him felled by a heart attack. In the aftermath, she’s consumed by the notion, common in India, that wishing harm on another may activate such harm.
Elsewhere, Parameswaran’s characters, humans and animals both, find themselves puzzled by love and power, devotion and detachment. The speaking tiger in “The Infamous Bengal Ming” finds its attempts to love a human being bloodily thwarted by its own brute strength. The executioner in the finely mysterious title story insists that his is just a job like any other, even while revealing, in his disheveled English, that his bewildering power makes him “wonder the universe.”
Parameswaran’s desire to ground his speakers’ voices in syntactical and cultural tics sometimes has the effect of turning an individual into a type, as when the executioner supplies the registers — but also the clichés — of Indian-accented English, reporting that “people always marvel how I am maintaining cheerful demeanors and positive outlooks.”
At their best, though, Parameswaran’s stories combine narrative brio, ringing ­voices and beguilingly looped plots. In the hilarious yet pathetic “Four ­Rajeshes,” the narrator, a man called Rajesh, confesses to homosexual passion as a railway-station manager in an early-20th-century south Indian village even as he berates a present-day man called Rajesh, presumably the “real” author of the story, for making the whole thing up, inspired by nothing more than an old photograph. Thus realist revelation and postmodern speculation proceed in parallel, like the very railway tracks the primal Rajesh supervises. Despite their occasional contrivances, these are very much stories that make us “wonder the universe.”
Posted by Chandrahas at 1:07 AM No comments: