A month in South Korea at the Toji Foundation for Culture 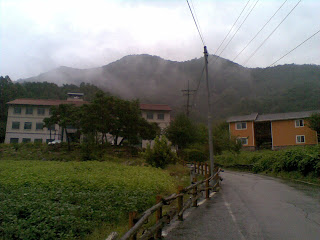 For the last month I've had the pleasure of living and working in the small village of Hoechon in South Korea, about three hours from Seoul, at the Toji Foundation for Culture, a center for Korean and foreign artists set up by the great Korean novelist Pak Kyung-ni (1926-2008).

The center takes its name from Pak Kyung-ni's greatest work, a sixteen-volume novel sequence, written between the years 1969-1994, called Toji or Land. Every year it hosts residencies for a diverse group of Korean artists, and  an annual residency sponsored by Sangam House, the Inko Centre, India, and the Arts Council, Korea, makes it possible for an Indian writer to join them. Indian writers who've come to Toji before me include the fiction writer Mridula Koshy and the playwright Manav Kaul.

Here at Toji I've been working on my new novel, wandering around the countryside and making occasional trips to the nearest town, Wonju, reading some Korean literature, and eating, drinking, talking, and playing ping-pong with a band of very sociable Korean writers, filmmakers, musicians and painters. The Foundation is set down in an uncommonly beautiful scene, ringed by tall pine-covered mountains that change colour in the varying light of the day and become obscured by clouds when it rains. All around us are lush fields of wild sesame, chilli, and corn, as well as apple and persimmon trees, and sudden surges of white, pink and red cosmos flowers. 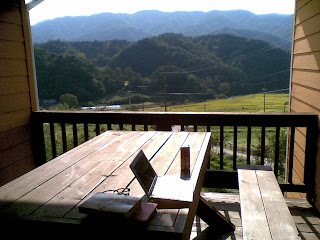 Dawn and dusk are especially beautiful, and as I walk on streets so empty that my passing often sets off an entire alarm-chorus of  village dogs, whose barks, echoing off the mountains, give an air of extreme criminality to my small trespasses. There's great pleasure to be had in the sight of these mountains, their undulating shape matched on the ground by the roofs, uptilted at the edges like birds' wings, native to Korean architecture. While I contemplate my material and work out its moments of emphasis and stillness, I hear in my mind's ear the captivating sound, at once familiar and strange, of the Korean instruments -- the stringed gayageum, the flute-like piri, and the booming changu drums -- that I heard on my first weekend here, when I was taken by my hosts in Seoul to an exquisite musical, Miso.

At weekend gatherings of the writers and artists on the program to drink the Korean liquors makkoli and soju, I have had to contribute my small repertoire of Oriya folk songs as a complement to their Korean ditties. Meanwhile, I've tried to develop a working Korean vocabulary word by word, with the English-speaking Korean writers having to serve as go-betweens for my more complex sentiments. Since what small merits there may be to my prose style are remote to my companions, my main stratagem for winning their respect has been my topspin forehand at the table-tennis table and my Korean pronunciation at the dinner table; in turn, they are patiently teaching me how to eat with chopsticks in the correct manner, at once direct and delicate.

Meanwhile, I've also been trying to read some Korean literature in English translation, about which I knew very little when I arrived: mainly the excellent translations of a number of Korean poets by Brother Anthony of Taize, among them some by the poet Kim Sa-in that I had the pleasure to publish in The Caravan earlier this year. Here I've also become acquainted with other translations by Kevin O'Rourke, a long-time student of Korean literature, Don Mee Choi, and Bruce Fulton. I've also been able to lay my hands on the three large volumes of Pak Kyung-ni's Land that are currently available in an English translation by Agnita Tennant. The novel is set between the years 1897 and 1945, and  is imagined on a scale that dwarfs most of the sprawling realist novels of the world whose narrative techniques it adapts: it runs to 25 volumes, and has over a hundred prominent characters. Tennant writes in her introduction:


Land has been acclaimed as the most powerful and important work in modern Korean literature. While it is the greatest national novel, it has at the same time a universal appeal as it deals with fundamental, borderless and timeless themes of humanity such as love, treachery, the gap between the rich and the poor, fate, and deep-rooted traditions facing the tide of change.

The novel begins in 1897 on a night of the calendar of great significance in Korea: Chuseok (literally "autumn night") a harvest festival held on the full moon day of the eighth month of the lunar calendar. The festival is one of joy, abundance, plenty to eat and drink, and the scenes that unfold before us are marked by this mood. But shortly afterwards, a dissenting note is inserted into the story by the narrator, who sees that times when joy is an obligation and man for a moment feels wealthy are precisely the times when old sorrows spring up most powerfully:


The Harvest Moon Festival of the eighth lunar month -- doesn't it have something of the translucent and frosty pathos of the finest hemp? How can a festival associated with the moon, which crosses the river of darkness like a shadow of death, be regarded as a symbol of abundance? As it hangs coolly over the ridge of the mountain the twigs of trees cast lacy shadows and a young widow clad in white silk walks the night road alone. Isn't the harvest moon of the eighth month perhaps a festival that celebrates the closing of a sorrowful life, revealing the art of renunciation to all living things, and especially to the poor. [...]
This is when they reflect on their many separations: elderly parents who perished in years of bad harvest, unable to keep alive on grass roots and bark; children in epidemics, left to die without medication, rolled up in a straw mat and buried in the nearby hills; a husband during the uprising dragged into the governor's house and beaten to a resentful death; and those many neighbours now asleep underneath the earth. The breeze plays gently on the strings of these sorrowful memories.
"Perhaps they are better off in the other world?"

My visits to Pak Kyung-ni's former residence in the nearby town of Wonju and to a museum that houses her manuscripts, books, and pictures from her life, as well as what I've been able to read here about what writing meant to her, left me with a sense of someone absolutely and enviably committed to literature, and who took great pleasure in work and in creation. In an essay written late in her life called "The Dangerous Power of the Material", she writes:


I think that being alive -- life -- is the most beautiful thing of all. And it is this thought now that is most dear to me. [...] It's not just human life -- flowers or animals, all that lives is beautiful. The reason why life is beautiful is because it is active. Isn't that what life is? That which acts? The world is full of material things. But all of these are passive. To be a thing is to be passive. To live is to be active.

I leave Toji this weekend -- incidentally the weekend of Chuseok -- to go back home to Delhi with many happy memories, and closer both to my own work and Korean life and literature.
Posted by Chandrahas at 5:25 PM 5 comments: