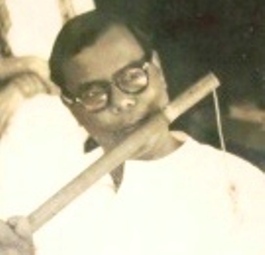 Is there another Indian novelist whose books contain, not just so many beautiful sentences, but so many different kinds of beautiful sentences, as those of Gopinath Mohanty (1914-1991)? No Indian novelist is as consistently and meaningfully melodious as him, and with no one else’s material does the reader feel such a strong sense – very hard to achieve in novelistic prose – of the concentration and economy of music. Most thrillingly, when one reads Mohanty’s great novels of tribal life in Odisha, one realizes that the notes he summons derive not just not from his own feeling nature, but from his material: the pleasure and danger of the forest, the proximity and capriciousness of the gods, and the elemental beat and spark of the life-force itself.

Thankfully, the impact of Mohanty’s stylistic dexterity and felicity in Odia shine through even in translation – or have been made to do so by some very painstaking and adept translators. Amrutara Santana, published by Sahitya Akademi in a translation by the Odia scholars and professors of English literature, (the late) Bidhubhusan Das and Prabhat Nalini Das, as The Dynasty of the Immortals, is one of two great novels about Odia tribal life written by Mohanty in his youth. The other is Paraja, which appeared almost thirty years ago in an excellent translation by Bikram Das.

Mohanty’s engagement with the tribals of Odisha began fairly early in life. As a young bureaucrat enlisted in the Odisha Administrative Service in the years just before independence, he lived in distant outposts in the district of Koraput, then, as now, one of India’s poorest regions. But when the young city boy with an MA in English Literature came into contact with people whom those of the social order to which he belonged thought of as primitive, simple-minded hillmen, he found in them a beauty and integrity, a generosity of spirit and a animistic empathy, a love of song and story that cried out to be enshrined in words.

But the tribals were also the “other” of mainstream Indian civilization, relentlessly patronised and exploited, destined to be on the wrong side of history even when India rid itself of its colonial masters. (“The Kandha,” Mohanty writes presciently, “is to be found wherever the forest is. However, once the forest is opened up, the Kandha is evicted from his land.”) Like his contemporary Bibhutibhushan Bandyopadhyay in Bengal with his forest novel Aranyak, Mohanty set out to describe both the rapture and the tragedy of this other way of life. But unlike Bandyopadhyay, he chose to do so from the point of view of the forest-dwellers themselves.

Readers of Paraja, about the tribe by that name, will immediately recognise the feel and force of the limber, capacious, almost centreless point of view in Dynasty of Immortals, about a group of Kandha tribals in a group of isolated, impoverished villages (“Here, humankind did not get anything from nature without a struggle”) in the Eastern Ghats. The narration ricochets continuously from the intimate and the domestic to the wide-angle and the cosmic, from the narrator’s almost ethnographic observations about the Kandhas to a tracking of the minds of diverse characters that unspools for us the same worldview from the inside. Mohanty’s translators find short and long, shapely and broken, sentences that capture the many shades of light and dark, the many intricate subtleties, that he conjures up.

Mohanty’s distinctive narrative method adds to the feeling of extreme intensity and compression: in tightly sculpted and focussed chapters no more than five or six pages long, written almost as short stories, we are hit by wave after wave of powerful feeling. But the jolt in this case is not just aesthetic, but – in Mohanty’s time and in our own – political. Mohanty’s ecstatic style is an instrument precisely designed to reveal the beauties of the way of life of his forest-dwelling protagonists.

Out here in the forest, distinctions between the human and the animal realm, the world of human artifacts and that of nature, the living and the dead, seem to be much more blurred than in modern industrial society. We sense this right from in the opening chapters of Dynasty, when the man who appears to be the protagonist of the story, the elderly village headman Sarabu Saonta, collapses and dies; nevertheless, his presence echoes across the 600 pages that follow. “Sarabu Saonta loved this earth,” we read. “He did not know how to love with discrimination. Life was truth, beauty; let the old body be destroyed, he would be reborn in this beautiful land.”

After Sarabu dies, his son Diudu, daughter Pubuli, and daughter-in-law Puyu are left to carry on all the rituals and reveries of their realm: the forbidding and enchanting forest, with its light and shade, cooing birds and hungry tigers.  In one scene, reminiscent of the story of the killing of the male krauncha bird and the grieving sounds of its mate that inspired Valmiki to invent the shloka meter of the Ramayana, Diudu kills a bird on a hunt and, reaching it as it lies thrashing on the ground, thinks he sees a cloud rising in the pupils of its eyes as it expires—an astonishing image. There are other thrilling hunting scenes, in which the contrasting energies of human social dynamics and violence towards beasts are mingled as expertly as Leo Tolstoy did in Anna Karenina (Mohanty was a voracious and cosmopolitan reader and even translated War And Peace into Odia).

In choosing characters who approach the business of living with such rapture and intensity, Mohanty reminds one of other twentieth-century artists and philosophers who, in an ideological age, have resisted the reduction of life to any system – people like the French film-maker Jacques Becker, who declared, “In my work I don’t want to prove anything except that life is stronger than everything else”, or the Iranian philosopher Ramin Jahanbegloo, who after being incarcerated in prison comes to the paradoxical realization that “the meaning of life is life itself.”

The forest is the realm not just of food-gathering, of the hunt, but also of love, the place where human beings succumb to “the instinct of eternal nature”. It is the place, in other words – and this is where Mohanty’s focus on a very particular social world at a particular historical moment acquires a universal resonance – where man and woman become Man and Woman, carrying on the eternal dance of life and creation.

Repeatedly in Mohanty’s novels, we are given this sense of what one might call deep time, the sense of an archetype playing itself out repeatedly across the centuries. The young people falling in love for the first time thrill to this new emotion; the storyteller, meanwhile, thrills to the sense of the very same figures becoming indistinct, bringing the past to life within the folds of the present. “Then the dialogue of Kandha courtship through question and answer ensued, the exchange of words from time immemorial; thousands of years had rolled by in the formulation of such exchanges.” For his characters the link to the past is not a matter of the historical record but rather an imaginative one rooted in a feeling for nature and the cosmos; it is in this sense that the tribals with their short life-spans and many hardships are nonetheless “the dynasty of the immortals”.

In 1953, a letter of complaint arrived at the office of Prime Minister Jawaharlal Nehru, sent to him by the land-owners and moneylenders who comprised the elite of Koraput. The letter said (I take this from an essay about Mohanty written by the critic JM Mohanty) – “To our great calamity and disaster Sri Gopinath Mohanty is posted here as the special assistant agent at Rayagada. He is always fond of hillmen and behaves like hillmen himself. He very little respects other classes of people before them. He behaves as if only born for Adivasis."

Perhaps the letter had an unintended effect. When the Sahitya Akademi was founded in 1954 to award literary achievement in the 24 major languages of India, Amrutara Santana was judged the first-ever winner of the Sahitya Akademi Award for Odia literature. It has taken sixty years to produce a worthy translation in English (marred, sadly, by the terrible layout and copy-editing that has unfortunately come to be the general standard for Akademi publications). The wait, though, has not been in vain. Mohanty’s ecstatic vision, shot through with light and dark, sings here on every page. In time, the world will grant that this contemporary of Garcia Marquez and Vasily Grossman had a vision of life no less original and enduring than them. But for now, let at least us Indian readers ignore no more this marvellous hillman standing at our very own doorstep.
Posted by Chandrahas at 12:10 PM 1 comment: