Kobo Abe and the face of another 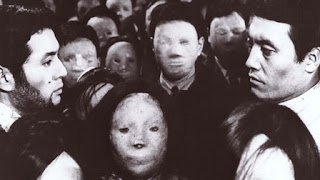 Novels sometimes serve as sophisticated thought experiments, exploring the effect on human nature of some unusual eruption or crisis. The characteristic method of Kobo Abe, one of half-a-dozen or so major twentieth-century Japanese novelists, was to concoct such extreme situations for his characters. Laid out on the rack as if in a bad dream, his protagonists both arouse our sympathy and pique our curiosity. What might it be to live like this?

Certainly very few characters in fiction suffer such extended torture, privation and abasement as Niki Jumpei, the protagonist of Abe's novel The Woman in the Dunes (1962). Jumpei, a teacher and an amateur entomologist, goes out into the desert in search of a rare beetle. Stopping in a remote village for the night, he is hosted by the villagers in a woman's home inside a deep sand pit. The next morning he finds that the ladder leading out of the pit has been removed. The only company he has is his host.

Jumpei rages and rebels, but to no avail, for he has no choice. If he does not work, there will be no food or water for him, and he will end up being buried by the sand. In the space of a day his place in a civilised social order has evaporated; he has become a slave and an animal. Abe's narration records Jumpei's thraldom to hunger and thirst, the gradual derangement of his thoughts, and his fierce desire for escape. Maneuvering a clever getaway, Jumpei is caught at the last moment and returned to his prison. The novel's poignant last section shows us a pathetic Jumpei reconciled to life in the pit. His spare time is given to preparing a pit of his own, in which he hopes to trap a crow.
In The Woman in the Dunes the conditions that affect the protagonist are external to him, and are therefore open to the charge of being contrived. Abe was to come much closer to illuminating the nature of the self and its relation to society in his next novel, The Face of Another (1964).
The unname

d narrator of the story is a scientist whose face is badly disfigured in a laboratory accident (the still above is from Hiroshi Teshigahara's 1966 film based on the book). Swathed in bandages that cover his ghastly scars, he realises that, although his personality and his work remain what they were, he has dropped out of society owing to the lack of a face. As a plastic surgeon explains to him, the face "is a roadway between oneself and others"; people cannot reach out to a man "without the passport of the face". Even his wife, for whom he should be much more than a face, treats him with a suppressed revulsion. The protagonist retreats to a quiet hideout and attempts to fashion himself a new face.
Estranged from the world when without a face, he finds that with his new face he is suddenly a stranger to himself– it is as if he has a new identity upon his old one. His plan is to approach his wife as a stranger and seduce her, but this proves more complex than he had imagined. In Abe's hands the problems of having no face, and then a new face, become the material of a drama more compelling than any detective novel or thriller.
And two old posts about the human face as observed in art and literature: On Orhan Pamuk's My Name Is Red and On The Essays of Leonard Michaels.
Posted by Chandrahas at 11:24 AM 3 comments: