On Junichiro Tanizaki's The Maids

This piece appeared recently in The Wall Street Journal. 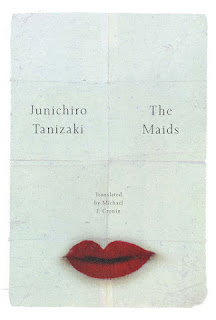 Novels, like life, tend not to take much notice of maids. In most novels domestics serve only to open and close doors, make meals, or assist with the toilette of those who have attained true selfhood. At best, they might pass a message between lovers or stumble upon some conspiracy. They are points in the plot—agents, not actors.

What a pleasure, then, to come across a story in which maids occupy center stage from beginning to end and are as clever and capricious as any bourgeois heroine. To many followers of Japanese fiction, the present writer included, Junichiro Tanizaki (1886-1965) is the greatest Japanese novelist of the 20th century, and “The Makioka Sisters” (1949)—his book about the familial and marital dilemmas of four sisters of an upper-class family, in which maids stand by in the shadows—the greatest Japanese novel.

But while at work on that book, Tanizaki was also engrossed in translating a foundational work of Japanese literature, a book written by a woman on the far side of the millennium. “The Tale of Genji,” a richly detailed story about the life of a sybaritic prince and his lovers in the imperial court of the Heian dynasty, was written by a lady-in-waiting, Murasaki Shikibu, at the turn of the 11th century. Some scholars call it the world’s first novel.

The book’s storyline—Genji’s roving eye means he does not limit his attentions to women of blue blood alone—requires many detailed portraits of accomplished women in service, women much like Murasaki. And while it would be a stretch to call them maids, their example seems to have given Tanizaki—the rare male novelist more comfortable writing about women than men—the idea of re-presenting the bourgeois world of “The Makioka Sisters” from the point of view of the kitchen rather than the salon.

Published in 1963, and set in what was then the recent past, “The Maids” is Tanizaki’s final novel. It is also—as Michael P. Cronin’s translation, the first into English, shows—one of his best. Loosely organized but written with Tanizaki’s usual narrative brio and sly intimacy, “The Maids” is a homage to the work of the humble in making a house a home.

In this case, the household is that of the elderly novelist Chikura Raikichi and his wife, Sanko. This prosperous couple own and rent a number of homes in the Osaka-Kobe region, and deploy a retinue of maids across them like pawns on a chessboard, judging them by their housekeeping, cooking, account-keeping and general tractability, but also by their liveliness, conversational skills and aesthetic sensibility.

Without exception, the maids all come from the same region, Kansai, in the extreme west of Japan. They speak a dialect worlds removed from “the smooth, clipped Tokyo way of speaking,” and even have in common a certain regional style of peeling vegetables. Here we see Tanizaki’s skill not just as a novelist but also as an ethnographer, taking great pleasure in the specifics of time and place.

The maids’ congested quarters in the main house, a room off the kitchen “only four and a half mats in size,” becomes a domestic subculture not just of class but of thought, feeling and memory. To understand these women as individuals, the narrator seems to be saying, we need to make the journey—the reverse of the one they themselves have made—to the place where they come from.

Raikichi is clearly the aging sensualist, drinking in the freshness and innocence of youth to keep up his interest in the world. But when sexual scandal finally erupts, there is no male hand in it. Two maids who have left Raikichi’s for another household, Sayo and Setsu, are discovered by their new mistress in the throes of passion. It is society that is shocked by this, not the narrator, who in a perfectly weighted detail gives us the two girls in their room, “seated in careful composure” and with their bags packed, waiting to receive notice.

Other maids, such as the beauteous Gin, make eyes at the tradesmen who visit the house and make use of the family telephone to advance their amours. And some girls just fall in love with themselves. When the maid Koma is taken to a department store with a closed-circuit television setup, she is thrilled to see herself on TV, “and she [rides] the escalator again and again, watching herself.” That Koma is not alone in her abundant self-regard becomes apparent when—in an allusion that works on many levels—we meet the maid Yuri, a great reader who owns “a complete set of Tanizaki’s adaptation of ‘The Tale of Genji.’ ”

Tanizaki’s focus on the pleasure and drama of everyday life is so all-encompassing that when the eruptions of history intrude—in the form of the second Sino-Japanese war and World War II—they ring, as desired, like pistol-shots at a party. As men are drafted into wartime service, many maids are sundered from potential husbands; others rush back home to help their aging parents.

But time has many gears. Even without these cataclysms, we come to see—Tanizaki is an insistently elegiac writer—that the world is always in flux. By the end of the story, we are in the 1960s; domestics now stay in service no longer than a year or two, and the very word “maids” has become archaic, replaced by “helpers.” Tanizaki’s great success is to make us see how it is not only the masters who mourn the passing of such a world, but also the old maids.

And for fans of Japanese literature, some other pieces: "Kobo Abe and the Face of Another", and a piece on Murasaki Shikibu's astonishing The Tale of Genji.
Posted by Chandrahas at 8:09 PM 1 comment: