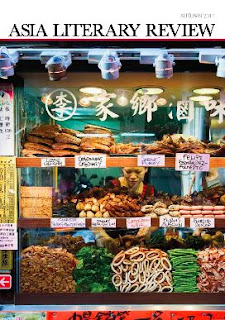 And an old story, "Dnyaneshwar Kulkarni Changes His Name", is here.
Posted by Chandrahas at 9:54 AM 1 comment:

Speaking In Delhi and Trivandrum this week

The literary magazine Pratilipi is a journal whose values I respect and admire. Even to call it bilingual, which it is, is to mischaracterize it, for it contains not just original work in English and Hindi but also translations into English and Hindi from many other languages. No individual mind, publishing house, or journal can come close to comprehending Indian literature across time and across languages, but Pratilipi seems to me very dynamic and ambitious in this regard.

Recently the magazine has diversified into book publishing, and among its new titles is one of the most enjoyable books I've read this year: The Pratilipi Special on the Village. On Wednesday, November 16, the magazine is hosting a joint event for several titles in Delhi at the India Habitat Centre. There will be readings by the poets Mangalesh Dabral, Alok Bhalla and Asad Zaidi, and then Jai Arjun Singh will speak on Pratilipi's list of Swedish novels and I will speak on The Pratilipi Special on The Village.

If you're a student, or just a reader interested in literature outside the mainstream, come along: the Facebook page for the event is here. Would that such events were around when I was a student in Delhi at the end of the nineties; then my education in Indian literature would have taken far less time than it did. In those days there was no transmission of information about events on the Internet; nobody ever invited me to anything; I was confined to English literature classes at Delhi University, and my only outings in culture were viewings of obscure (but beautiful) films in the hushed, prayerful atmosphere of the Iranian Cultural Centre on Ferozeshah Road. This was in its own way not such a regrettable matter, as those films have decisively influenced my aesthetic beliefs, but all I meant to say is that if such an event had taken place in 1999 and I'd known about it I'd have definitely gone for it -- and so should you.

And on the afternoon of Friday, November 18, I'm giving my lecture "Ten Ways In Which Novels Can Change Your Life" at the Hay Festival in Thiruvananthapuram, Kerala. Just in case there are some of you at the talk -- unlikely, but one should never say never -- who also came to the talk by the same title in Delhi in February, don't worry, I'll have changed lots of the novels around, so even if we've grown nine months older -- it's terrible, I know, how time passes, and nothing to show for it but more chapters of a novel thrown out into the trash for lack of rhythm, energy and sense -- the talk won't have. The entire program for the festival is here.
Posted by Chandrahas at 4:33 PM 1 comment:

Email ThisBlogThis!Share to TwitterShare to FacebookShare to Pinterest
Labels: lectures

Some things I've been reading recently in and around Indian literature:

"Shiva's Blue Throat: A Personal Vision of The Artist's Role", a very good essay by the novelist Kiran Nagarkar on the provocative idea of Shiva as a model for the writer ("The quality and truth of an artist depend not merely on the precise observation and nuanced mimesis of the lives of his creatures, but on how far he can, through his artistry, undergo every single emotional crisis, betrayal, thought-process, dilemma, joy and terror that his characters experience. That is the test of Shiva. The life of the character the writer is depicting must be absorbed so fully that it must burn his throat blue, a blue unlike any other and result in a voice which is distinctive and unmistakable. In short, the artist must become Shiva.")

"Should Writers Be Sexier Than You?" an intriguing essay by the novelist (and, last that I heard, a friend of The Middle Stage, although in times such as ours one can never rely on news more than three hours old) Karan Mahajan on the idea of the model as a model for the writer. Mahajan recounts how he posed almost naked, next to a tempting model wearing not much more than him, for Canteen magazine in an effort to overturn the modern writer's reputation for frowsiness. ('Authors present themselves as bright, sincere, humble, hardworking people, like Republican presidential candidates. “It’s all just revision and craft,” one says. “I couldn’t have done it without my mom,” offers another. “My three years of MFA were the best of my life and I would do them again if I could,” says a third.) When you read this piece you'll also find alongside it photographs of some of the bright lights of south Asian writing today, looking like they've just emerged from the pages of Vanity Fair. Also worth noting is that, of all the South Asian writers featured in this piece, everybody is clearly dressed up to achieve a particular look, but only Mr. HM Naqvi appears simply as his everyday self. Would that Tehelka had contacted me, too, to photograph me for this project. But deep in my heart I know the reason why I'd never come close to qualifying for such a project: I'm too cheerful to be sexy.

"Theory and Practice" a debate in The Caravan between the historian Ramachandra Guha and the head of the CPI (M) Prakash Karat about the content of "After The Fall", an essay Guha wrote a few months ago about the decline of the Left in India. It's not often that the head of an Indian political party locks horns intellectually with one of its critics (imagine the likelihood of Sonia Gandhi sitting down at her laptop to compose a response to, say, a critique of the Congress by Arundhati Roy), so you must read this for a sense of the occasion as well as the shape of the skirmish.

"Watch This Man", a magnificently acerbic and thoroughgoing takedown of the ideas of the historian Niall Ferguson by Pankaj Mishra, who anatomizes not just Ferguson's journey through the field of provocative hypotheses about empire and America, but also the shape and course of an entire intellectual milieu. Mishra's essay combines close reading of words and sentences and cultural criticism in magisterial fashion.

"Exploring Rama's Anguish in the Valmiki Ramayana" by the scholar of classic and translator Arshia Sattar, whose very stimulating book on the same subject, Lost Loves, appeared earlier this year ("Because of teaching from [the Ramayana] and reading it over and over again in the past few years, I have developed a new intimacy with the text, one entirely different from the closeness that I had to it when I was translating. To my surprise in this rapprochement, I find my thoughts going more and more to Rama. As a card-carrying feminist, I am shocked that it is he who draws me to him, compels me to try and understand his cruelty towards Sita and what it means for him to be king, perhaps even against his innermost wishes. I find myself more and more involved with Rama and am convinced that the way to a more complete understanding of the Ramayana, especially for contemporary women, has to be through an inclusion rather than a rejection of Rama and his questionable behavior.") Sattar's attention to the dilemmas of well-known figures from the epics in limber and searching prose reminded me of another excellent book in the same small field: Chaturvedi Badrinath's The Women of the Mahabharata.

"Rabindranath Tagore Revived" by Seamus Perry, a very astute look at Tagore's reputation a century after his heyday. Many figures appear in passing in this piece, including WB Yeats, DH Lawrence, Ezra Pound, and Bertrand Russell, who delivers the hilarious putdown, not without a degree of truth: "The sort of language that is admired by many Indians unfortunately does not mean anything at all."
Posted by Chandrahas at 9:59 PM 2 comments: