What Would Dickens Write Today?

This essay appears this weekend on the British Council India website as part of its Dickens Bicentenary special, alongside essays on the same theme by other Indian novelists (Sudeep Chakravarti, Neel Mukherjee, Anjum Hasan, and Anita Nair)

Charles Dickens and the modern industrialized city both came of age around the same time. Dickens’s descriptions of both the beauty and the horror of urban life remain intensely apposite today, and are part of the permanent inheritance of the human race.

“A metropolis,” the German writer Robert Walser wrote early in the twentieth century, “is a giant spider web of squares, streets, bridges, buildings, gardens, and wide, long avenues […], a wave-filled ocean that for the most part is still largely unknown to its own inhabitants, an impenetrable forest, an opulent, overgrown, huge, forgotten, or half-forgotten park, a thing that has been built up too extensively for it to ever again be oriented within itself.” This is a very Dickensian description, with its metaphors of webs, oceans and forests, and the suggestion of both knowledge and bewilderment.

The London in which Dickens lived, thrived, and  — especially as a child and a young man — suffered was in his day the greatest and most populous metropolis the world had ever seen. The journalist Henry Mayhew, a contemporary of Dickens, wrote, “In every thousand of the aggregate composing the immense human family, two at least are Londoners.” The many new implications of what it meant to belong to, and take sustenance from, a human family of this enormous size, with its variety, instability, grotesquerie, anonymity, interconnection, anarchy, and forms of community and exchange were explored intimately by Dickens in his novels and his journalism.

But Dickens’s achievement is not just one of empathy, of a surpassing range of perception and powers of connection. It is also one of style. Dickens invented a prose style that was equal, on the page, to the speed of urban life, the explosion of sense perceptions available within it. Just as, within the city, previously inanimate matter was now brought to life by steam and electrical energy, so too in Dickens, characters, scenes and conversations are animated by an extraordinary energy and clarity. The familiar is made unfamiliar; the unfamiliar familiar.

Here is Dickens describing the construction site for a new railway line in Dombey and Son: “There were a hundred thousand shapes and substances of incompleteness, wildly mingled out of their places, upside down, burrowing in the earth, aspiring in the air, mouldering in the water and unintelligible as any dream.” Such sentences don’t just describe a new world, but resemble it in their collage of different perspectives.

As the half-finishedness of this landscape suggests, in many ways the modern urban cities closest to Dickens’s London no long belong to Europe, but to Asia and Africa. For better or for worse, cities like Mumbai (where I live) have the same narrative energy. They exist permanently suspended between need and satiation, wakefulness and sleep, impoverished by the city and yet unable to imagine a life outside it, mixing a thousand different tongues and accents into one jumbled-up patois.

Every construction site leaves behind a permanent fund of debris; every line of progress, whether physical or mental, is interrupted by the movement or will of another. For every kind of activity that is organized and regulated, there exists a shadow world where those in need and those who have something to offer find a way of coming together. Now that I don’t live in Mumbai all year round any more, I find that I can return to it just by opening to any page in Dickens’s work. Under the surface differences of names, streets, and manners, it is a similar world.

What I like most about Dickens are the absence of hierarchies in his narrative world, the way in which each character, whether high or low, major or minor, is given a distinct language and accent. A recent study showed that over 16,000 characters appear in Dickens’s work. That is, Dickens invented more people than we meet over the course of a lifetime. Perhaps we love Dickens so much because the world he gives us is bigger than any world we know.

What would Dickens write today? I think he would be greatly fascinated by the Internet: what it does to human selfhood and to relationships, how it is both a means to something and an end in itself. He would be struck, too, by the new forms of capitalism in place today: the financial bubbles of mortgages, derivatives and real estate, the networks of economic connection propelled by globalization and the field of economic desire that trails us wherever we go (he could stay with the titles Great Expectations and Hard Times).

He would delight in making ironic use of the jargon of advertising and PR, and mocking the construction (and indeed constriction) of the human being as primarily a consumer and of the measurement of human progress primarily by economic indicators. And he would love to stand on the elevators of the Tube stations of London, looking at the vast array of human types from all around the world before him and listening to the sounds and stresses of their English and thinking of the images and transcriptions that would make them live again in his work.

Or -- to think about the question in another way -- perhaps Dickens would walk into a bookstore and find that he wouldn’t need to lift a finger. He could pick up one of his books and find that, more than a hundred years after his heyday, he was still in tune with the world.
Posted by Chandrahas at 12:26 PM 3 comments:

Today, February 7, marks the two hundredth birth anniversary of Charles Dickens. This essay on a new book about Dicken's early years in literature appeared last weekend in The National.

Email ThisBlogThis!Share to TwitterShare to FacebookShare to Pinterest
Labels: literary biography, the novel 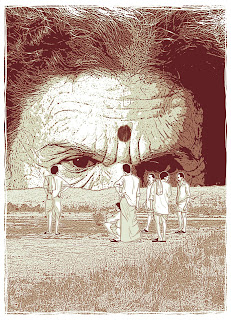 Here are my selections of fiction and poetry for the February issue of The Caravan:

Gogu Shyamala's story "But Why Shouldn't The Baindla Woman Ask For Her Land?", in a translation from the Telugu by Sashi Kumar, from Shyamala's new book Father May Be An Elephant, and Mother Only A Small Basket, But..., published this month by Navayana,

and four poems by the South Korean poet Kim Sa-in, in translations by Brother Anthony of Taize.

Older selections are here and here.

Posted by Chandrahas at 12:03 PM No comments: