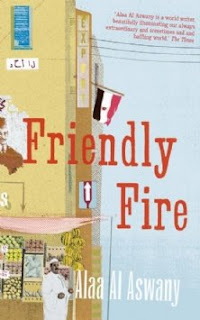 Novelists might be usefully divided into idealists, who wish to see a better world even as they strive to faithfully portray the one that is, and realists, who interpret life in a harsher and more pessimistic way as if to say that nothing will ever change. The Egyptian writer Alaa Al Aswany is without doubt one of the latter. Aswany, who leapt into the consciousness of the Anglophone novelistic universe with the publication of a translation of his novel The Yacoubian Building in 2007, is a poet of the appetites and passions, of a moral universe that is corrupt and doesn’t mind it. Some readers have declared him a heir to Naguib Mahfouz for his panoramic narratorial vision and interest in low-life stories, but the resemblance is really one of structure and not of spirit. Aswany is very much an original.

Friendly Fire, comprising a novella and a bunch of stories, is Aswamy’s latest attempt to copy Egyptian life out into a set of highly charged and coloured fictions. Since both his earlier novels, The Yacoubian Building and Chicago, spun around the lives of a dozen or so characters at the same time, one might argue that Aswany is basically a writer of short stories anyway: his interest is in character sketches that will build up into a portrait of an entire world. As with the earlier books, Friendly Fire too is about the brazen and self-seeking behaviour of those “well versed in the uses of power” and the powerless ones who feel the lash of their whips. Indian readers will find there is much that is familiar in Aswany’s portraits of politicans, heads of university departments, bureaucrats, and doctors, happily feathering their nests and tripping up the lives of others even as they hypocritically mouth prayers and pieties.

The trick in Aswamy’s method, though, is in never criticising overtly, but in only showing us the world as it is. In this way, without moralising, he both revels in ugliness and yet succeeds in making us feel guilty on behalf of those characters who find out, to their shock and despair, that “it is by evil laws that the world is governed.” This is the difference between him and someone like Aravind Adiga in Between The Assassinations, which is also a good book but sometimes reveals the writer’s interpretative pressure upon the material too much.

Aswany is a scourge not just of power and hierarchy, but also of religion. In one story, “The Kitchen Boy”, he shows us an outstanding young doctor, Hisham, reduced to the status of kitchen attendant by his seniors so that he may suffer the same indignities that they did during their induction. Hisham’s troubles are all of man’s fashioning: they are the consequence of the crookedness, callousness, and spite within society. Yet when he confides his troubles to his mother, she suggests that he perform daily a religious ritual that will ease his woes, and Hisham reluctantly agrees. Religion, in Aswany’s reading, is often like putting a blindfold over one’s eyes; it may be a refuge from injustice, but it also allows injustice to continue. Aswany’s narrations often feature quotations from the Quran that are used ironically, such as when a man is trying to smuggle some goods through customs and begins reciting the verse about “covering their eyes so they do not see.”

The other distinctive feature of Aswany’s writing is its frank sensuality, its love of pleasures both free and forbidden. “I drank of beauty until my thirst was quenched,” declares one of his protagonists, while another holds that “joy was a wild beast with vulgar features, an implacable urge lurking within everyone and everything in creation.” Such is the force of our instincts that they often overpower all propriety and reason, as when a man slips out of his father’s funeral ceremony to return to eating a dish of beans he had left behind when the news of the death came in.

And two old essays on Aswany: on The Yacoubian Building and Chicago.

[This essay first appeared in Mint.]