On Aravind Adiga's Between The Assassinations 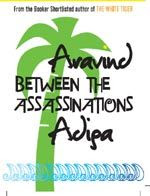 In one of the stories of Aravind Adiga’s Between The Assassinations, a book that follows his Booker Prize-winning The White Tiger out into the world but was written before it, we see a quack sexologist, Ratnakara Shetty, on his way to the town dargah to sell his pills. As Shetty approaches the site he comes across the familiar Indian melee of pathetic supplicants – beggars, lepers, and the handicapped, including one especially grotesque specimen with a stump of a leg and, where there should be arms, “little brown stubs like a seal’s flippers”. Ratnakara Shetty leaves behind this “sorrowful parade of humanity” and walks on. Soon he is surrounded by yet another group, this time superficially normal, that also throbs with pain and despair: those afflicted by venereal disease.

Email ThisBlogThis!Share to TwitterShare to FacebookShare to Pinterest
Labels: essays on Indian fiction

Kittur is not fictional.It is a village in Belgaum district in Karnataka.

Completely agree that Kittur is not fictional but it is not a village in Belgaum. It is modelled on Mangalore, a coastal town in Dakshin Kannada district of Karnataka. He has even kept the names of certain places in Mangalore intact.