On The Oxford Anthology of South Asian Food Writing

A slightly different version of this review of The Table is Laid: The Oxford Anthology of South Asian Food Writing appears today in Mint. Here there are links to many good essays on food afterwards.
"I must eat to live,” the great food writer MFK Fisher wrote in one of her essays. “I want to live well, therefore I must eat well.” Note that Fisher does not say, after the fashion of many gourmands, that she lives to eat, yet she makes her point about the centrality of food in human affairs pretty strongly. That food has consequences which are not just physical, but also moral and spiritual—that you are, basically, what you eat—is asserted also by the Gita, which links rasa, or taste, to guna, or character, by pointing out how men of different temperaments love different kinds of food.
Thus food writing, ostensibly a narrow genre, may, like travel writing, become a prism through which personality, history, religion, social hierarchies and gender relations are explored. Just such a notion is advanced by The Table is Laid, an anthology of South Asian writing bringing together stories, poems and essays in which acts of cooking and consumption are central.
It is a wide-ranging selection. If Mahatma Gandhi’s essay on the tonic effects of fasting asks us, on the one hand, to desist from eating, Nissim Ezekiel’s poem "Irani Restaurant Instructions" ushers us, on the other, into a world where people may do nothing but eat: “Do not make mischiefs in cabin/Our waiter is reporting.”
The best story in the collection is Bibhutibhushan Bandyopadhyay’s "The Trellis", which links human life memorably to the cycle of the seasons. Kshenti, the oldest daughter of a poor village couple, is very fond of food, especially pui leaves. Her appetite is almost unseemly, and her mother worries about how she will adjust to her new household when she marries. Before she leaves, Kshenti plants a small pui sapling in the courtyard. She is badly treated in her new home and dies suddenly of smallpox. In the story’s last scene, Kshenti’s two sisters are walking in the courtyard, where they see the pui plant has grown heavy and luxuriant, “full of the loveliness of growing life”.
Chitrita Banerji’s essay "Patoler Ma" evokes the sounds of the sil—the heavy spice-grinding stone used traditionally in Indian homes—and the colours and smells of the pastes ground upon it in her childhood home by their servant, Patoler Ma. Asked one day what her favourite spices are, Patoler Ma tells the girl Chitrita she cannot afford most of them—her contact with them is limited to grinding them for others. This peculiar inequity, writes Banerji, “lived with me and edged me towards the curiosity about other lives and other worlds that consumes all writers”.
John Thieme and Ira Raja, the editors of The Table is Laid, have organized its contents under different headings: “Rites, Ceremonies and Customs”, “Herbs and Spices”, “Discourses of Desire”, and so on. A cursory reading, though, of their overlong and stuffy introductory essay might give the reader a sense of the problems with the book. Many pieces seem to have been selected less for reasons of literary merit and more because they fit into a particular category, or can be interpreted as supporting a specific theoretical point.
The editors’ understanding of their material is sometimes baffling. For instance, their selection includes Vaikom Mohammed Basheer’s delightful "Poovam Banana", a story about two newlyweds. Jameela Bibi wants her husband Abdul Khader to buy her two poovam bananas from the market. Unable to find poovam bananas anywhere, Abdul Khader crosses the river in search of them, but in vain. Finally, he settles on buying her a dozen oranges, and nearly drowns on the way back. The editors declare pedantically: “Jameela Bibi’s special request is threatening, because it is an expression of desire … Jameela Bibi’s inability to have her desire for the fruit of her choice fulfilled is an index of real, and not just symbolic, powerlessness.”
But in the story the bananas are not available at the market! Can we really then read such a meaning into it? In fact, we enjoy Basheer’s story for reasons other than those the editors propose. But some of their other choices are more dreary. For this reason The Table is Laid, like a buffet laid out at a five-star hotel, offers fare that is only intermittently interesting.
Readers might trawl more productively, and for free, the special numbers on food issued just recently by three good periodicals: Seminar, Himal and Outlook. Of course none of these feature any fiction, but between them they feature some outstanding essays grouped around different themes. The Outlook issue, for instance, is on the theme "Food and Towns", and the Seminar issue about the globalization of Indian cuisine.
Here's my own selection: "Mountain Meal Memories" by Pushpesh Pant, "In The Flesh" by Nilanjana Roy (not for squeamish vegetarians, as it begins with three paragraphs' worth of "animals I have eaten over the last three decades"), "A Sattvic Nomad" by Pankaj Mishra, "Almora: Land of Gup" by Ira Pande, "A Basic Kathmandu Thaali" by Shanta Basnet Dixit, "Sausages In A Rosary" by Lesley Esteves, "Cooking Under The Raj" by David Housego, "Punjabi Chinese" by Sourish Bhattacharyya, "Menusmriti" (listing the food specialties of many small Indian towns), "Veggie Living, Contemporary Thinking" by Sujeev Shakya, "Taking Food Seriously" by Rudrangshu Mukherjee, "Eat Out, Eat In" by Ashok Malik, and "In Search of A High Cuisine" by Zilkia Janer. 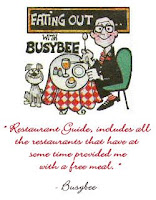 Here are two older essays: "The Philosophy of Food" by the British philosopher Roger Scruton, and "Are We What We Eat?" by Rukmini Bhaya Nair.
And an archive of scrumptious essays on Bombay restaurants both high and low by the legendary Indian journalist Behram Contractor ("Busybee") can be found here.
And now I'll be off to my neighbourhood Udupi joint, Shree Sharda, to lunch on those two 30-rupee gourmet treats, the coconut uttapam and the chikoo milkshake.
Posted by Chandrahas at 1:22 PM

I picked up A Strange Attachment from the library after reading the review in your archives.

This reference to "The Basella Trellis" reminds me most of the motherly dilemma - the pain in denying her child, the despair at this flaw in an otherwise obedient and helpful Kshenti and the one time when she is overcome with emotion, serving Kshenti plenty of pui and resonating with her delight.

This is not about South Asian food, but Anthony Bourdain's lovely paean to New York, and New York eating, is worth reading: