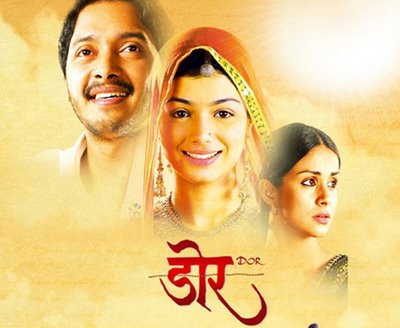 A few minutes into Nagesh Kukunoor's new film Dor - after a set of early scenes of great tenderness and beauty featuring two pairs of newlyweds - we see one of his two female protagonists, the Rajasthani girl Meera (played by the marvellous Ayesha Takia), perched on a pile of rocks with a mobile phone in her hand, making her monthly phone call to her husband in Saudi Arabia.

She asks for him by name, and is told that he is no longer alive. We see the expression on her face change, and the phone drop from her hand. As if it cannot bear to face her grief directly any more, the camera cuts to a low position behind her. She appears framed against the empty blue sky, which seems to reflect back her great desolation and puzzlement.

The camera cuts again to a shot which projects a sharp irony, with Meera in the background, and in the foreground, with his back to her, the man who has given her his mobile phone for a fee. The seconds he is counting down on his wristwatch do not progress in the same way for Meera, for whom time has effectively stopped from this moment onwards. Yet it is not a simple irony, in which the boundless grief of one character and the grubbery of another are unambiguously juxtaposed. In an earlier scene we have seen the man walk away to a distance to give Meera her privacy. This is why, on this occasion, he has no clue of what is happening to her. He is both calculating and kind. From the different aspects of this one scene we can tell that we are going to watch a drama of considerable subtlety.

As Baradwaj Rangan has also noted, Dor resembles Iranian cinema in its close attention to the play of human feelings when presented with complex moral dilemmas. Zeenat (Gul Panag, compellingly direct, droop-shouldered and gravel-voiced) learns that her husband stands accused in a foreign country of the death of another Indian man, and the only way in which he can be reprieved is if the dead man's wife will consent to his pardon. She sets out from Himachal Pradesh for Rajasthan (Kukunoor's use of the two contrasting landscapes to create mood is one of many good aesthetic decisions) in search of the unknown woman who holds the key to her own future. In a marvellous scene in which the two lead characters meet for the first time, Zeenat reveals she is in search of her husband but cannot bring herself to explain the circumstances. Meera innocently asks, "Why, do you think he can be found here?" And we know that yes, in a sense it is only here that he can be found.

Takia's is the most naturally expressive face of any actress in Hindi cinema currently. Here it radiates innocence and simple faith, and, covered at first by a gauzy pink veil and then by austere blue widow's robes, is the subject of many striking close-ups. On several occasions she conveys the state of being overcome by strong feelings, in long takes where the camera stays fixed on her face, by nothing more than a flicker of the eyes and a slight dilation of the nostrils.

Her character has a highly developed moral sense, and also a natural moral sympathy - one does not necessarily eventuate in the other. In one scene where the two women are talking about their husbands (Meera does not yet know the entire truth), Zeenat remarks that they are both consumed similarly by memories. At this Meera pipes up: "But there is a difference: you still have hope, but I don't." This is quite true, but then she becomes aware of her impetuosity and, reaching out to the other, says, "I shouldn't have said that. Loss can't be measured out and compared in this fashion."

The depiction of Meera's many moods and facets make this one of the best character studies of recent times. Meera lives in a world of restricted choices, and admires Zeenat for her freedom and independence. Later, when she learns the truth, she is inflamed, and exudes a heavy contempt. She declares to Zeenat that it has been her dream to slay her husband's killer with her own hands, and refuses to comply with Zeenat's wish. Later, when she rethinks this decision and delivers to Zeenat the letter of pardon just as Zeenat's train about to leave, the image of the life-giving letter exchanging hands is framed against the very sky that seemed to echo once with a sense of Meera's loss. If the first shot suggested human powerlessness before fate, this one attests to the ability of human beings to transcend their circumstances and to change the world.

The last drama of such force I saw was the Iranian filmmaker Tahmineh Milani's Two Women, and indeed Dor might have gone by the same title. Kukunoor is correct, I think, in pointing to how unusual it is in Hindi cinema for two women to work out a conclusion without a man's intervention - in fact the film as a whole carries a bracing feminist message. He is also to be complimented on his use of Indian landscapes (some thoughts by Amrita Sher-Gil and Satyajit Ray on its depiction on film can be found here in this old essay on Sher-Gil), on Salim-Sulaiman's unusual background score - it is a great pleasure to hear the sarangi given such prominence in our synthesiser-and-drums times - and Mir Ali Hussain's beautifully turned-out dialogue. Yet his work also has some faults.

His villains are too simply bad. Girish Karnad, who rarely appears in any other Hindi films these days, seems to take a special pleasure in playing utterly unsympathetic characters in Kukunoor films - the corrupt and conniving coach, shavenheaded like a baddie of old, in last year's Iqbal, and now the bullheaded and tawdry patriarch here, tempted into quoting a price for his own daughter-in-law. The irony is that Karnad is himself a playwright of great distinction. In Dor the exuberant tomfoolery of Shreyas Talpade, the Iqbal of Kukunoor's previous film, as a master of disguises is entertaining enough, but mostly his character exists to provide a few predictable laughs and to add half an hour of screen time. Watching the film a second time, I found his part discordant.

Strangest of all is Kukunoor's own appearance on screen as the factory-owner Mr.Chopra. It is known that Kukunoor's early films, made as a relative nonentity working on the fringes of Bollywood, were shot on shoestring budgets. As if unwilling to make a total break from those old days of desperate moneysaving gambits, he continues to cast himself in major roles in big-budget works, when if he had auditioned for these roles he would have been the first to be cast out. The spectacular dodginess of his delivery of the line "Ab aagya deejiye" ("Now please excuse me") at the close of his first long scene opposite Karnad has to be seen to be fully appreciated.

Some other pieces on film: on Kukunoor's Iqbal, Rakeysh Mehra's Rang De Basanti, and Tahmineh Milani's Two Women. Now I've got some other pressing work to attend to, so ab aagya deejiye.

Posted by Chandrahas at 1:48 PM

Fantastic review. I will definitely see the movie. I had seen it's Malayalam original - Perumazhakalam - which itself is a good movie, but after reading this review, I feel like seeing Dor.

This is a beautiful comment- you write exceptionally well and have a mastery of descriptive language which I seldom see in the blogosphere. You have made me very eager to see this film and through reading your blog I've become incredibly humble about my own cultural attainments- thankyou.

Great review. I'm not a film buff at all, but with a couple of small international film screeings around here in the near future, I'm now considering seeing it (or perhaps when back in Singapore) after reading this post.

Seriously, you ought to consider writing a bit more on films. (And of course, more on cricket :-)

it is only because of u that i'll watch this movie... u write so well

I'm very glad you mention the name of my dear friend Ali Mir who's written the dialogue for the film. Now, I'm hoping that Bollywood producers read your blog as regularly as I do. I'd like them to give Ali more writing assignments.
P.S. If said producers are indeed reading this, Ali is also very good looking. Just as Hash looks like an Indian Matt Damon, Ali looks like a Hyderabadi Antonio Banderas. Banderas with a taste for Ghalib.

Mentor - Yes, I haven't seen *Perumazhakalam*, so I don't know how similar the two films are to each other. I'll leave that judgement to you.

Gracchi and Adi - Thanks very much for your kind words. Actually there's nothing to it. You'll know that watching or reading good work generates strong feelings. Then it's simply a matter of listening to those and putting them down. And if you just take care to leave out all the exclamation marks that are sounding in your head, it all looks very learned on the page. Try it sometime.

Salil - If I had a choice I'd write a great deal more about films, but it just takes me so long, so very long, to compose all these replies to comments that I just don't seem able to have the time. But I'll do my best; I'll dash off replies faster now, and work harder. I won't waste my time; I'll write short replies, and won't keep going off on tangents.

Amitava - What influence you have! A Bollywood producer called Mr.Chopra has just written to me. But he doesn't want any dialogue writers. Instead he says making a film that's going to be a remake of *Desperado*, and he's asking if Ali would be willing to screentest for the lead role. For the time being I've written back asking if he's ever planning to remake *Good Will Hunting* - one good role and I can retire for ever to the hills.

I don't know how I missed this review: I just read it 'cos you linked to it in your latest post. Dor is one of my most-loved movies, and I agree completely with everything you've said here.