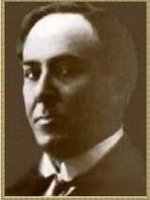 If most people in the English-speaking world are acquainted the work of a Spanish poet in translation at all, then that work is almost always that of Federico García Lorca, also the greatest dramatist of twentieth-century Spain (Blood Wedding, The House of Bernarda Alba). Like Amrita Sher-Gil, the subject of my last post, García Lorca led a flamboyant and colourful life and died young, and the legend of his life has to some extent ensured that his work is not forgotten.

But a Spanish poet of equal (if not greater) distinction and a curious charm is Antonio Machado (1885-1939), a slightly older and definitely more old-fashioned poet than Garcia Lorca. Their lives could not have been more contrasting. Lorca achieved early fame, toured the world, won notoriety for his homosexuality, and was murdered by political opponents at the start of the Spanish civil war (an irony of which is that this event, reported around the world, also secured his reputation). Machado's life was a placid unrippled pool by comparison - he lived all his life in small towns in the province of Castile, served for decades as a schoolteacher, and journeyed out of Spain only three times in his life. One is tempted to draw a comparison between the Indian writer in English, often earning large advances and moving from one world capital to another, and writers in the vernacular, often working away quietly and in relative anonymity for decades before they have a chance of even a wider Indian readership.

But to return to Machado - it was not that his life had no drama to it, it was only that it was a more private drama. Just as Dante had Beatrice, so Machado had his own love the image of whom he carried always in his heart, Leonor. This was a girl nine years younger to him - the daughter of his landlady in Soria, a town where he was then teaching - whom he married when she was fifteen, and who died of tubercolosis when she was twenty-four. Machado never remarried, and many of his poems express the sense of the transient nature of all that in life that makes us happy.

Consider the complex play of feelings in one of Machado's best poems, "The Eyes" (here in Alan S. Trueblood's translation):

I
When his beloved died
he thought he'd just grow old,
shutting himself in the house
alone, with memories and the mirror
that she had looked in one bright day.
Like gold in the miser's chest,
he thought he'd keep all yesterday
in the clear mirror intact.
For him time's flow would cease.

II
But after a year had passed,
he began to wonder about her eyes:
"Were they brown or black? Or green? ...Or grey?
What were they like? Good God! I can't recall..."

III
One day in spring he left the house
and took his double mourning down the street
in silence, his heart tight shut...
In the dim hollow of a window
he caught a flash of eyes. He lowered his...
and walked right on...Like those!

The man wants the memory of his beloved to be undimmed and untarnished, to stop time at the point that she left him. But time hurries on, and despite his best efforts she begins to recede from his memory. The conclusion of the poem, in which he walks down the street and sees a pair of eyes "like those", beautifully expresses his double sense of wanting to be true to someone's memory but also his yearning to love again. Are the eyes of the woman in the window really "like those"? They can hardly be, but immediate experience is always more powerful than memory, and something always arrives to fill in the gap for that which we cannot recover. The poem is simultaneously an elegy to a a person lost forever and a recognition of the truth that ultimately we have no choice than to live in the present. Note Machado's marvellous use of ellipses to convey the jagged rush of thought - "He lowered his…/and walked right on…Like those!"

Machado was the best kind of poet, able to explore the most serious concerns while also retaining an ability to laugh at himself. Here is the poem "Last Night As I Was Sleeping", in a translation by the poet Robert Bly:

Last Night As I Was Sleeping

Last night as I was sleeping,
I dreamt - marvellous error! -
that a spring was breaking
out in my heart
I said: Along which secret aqueduct
Oh water, are you coming to me,
water of a new life
that I have never drunk?

Last night as I was sleeping,
I dreamt - marvellous error! -
that I had a beehive
here inside my heart.
And the golden bees
were making white combs
and sweet honey
from my old failures.

Last night as I was sleeping,
I dreamt - marvellous error! -
that a fiery sun was giving
light inside my heart.
It was fiery because I felt,
warmth as from a hearth,
and sun because it gave light
and brought tears to my eyes.

Last night as I was sleeping,
I dreamt - marvellous error! -
That it was God I had
here inside my heart.

That repeated interjection - "marvellous error!" - transforms the meaning of the whole poem. Paradoxically the speaker's words appears more vivid, more true, precisely because he asks cleverly if they are only dreams with no significance to real life.

Here are some other poems by Machado: "Has My Heart Gone To Sleep?", "Evening Rainbow", "Portrait" ("In my dealings with women I’ve been no Don Juan/(I could never be bothered to dress for the part),/but I received the dart allotted me by Cupid/and have enjoyed all the comforts women bring") and a selection of translations by AS Kline.

A good essay on Machado's poetry by William Zander can be found here. And here is a piece by David Grayson on Garcia Lorca's influential theory of the duende - that mysterious power "which everyone senses and no philosopher explains".

Some old Middle Stage posts about other poets: "Constantine Cavafy's City", "Chess with Jorge Luis Borges", "Nazim Hikmet in prison", and "The despair of Attila Jozsef".

And one other post with some relation to "The Eyes" - "Sirshendu Mukhopadhyay's language of love".
Posted by Chandrahas at 10:51 AM

Email ThisBlogThis!Share to TwitterShare to FacebookShare to Pinterest
Labels: poetry

Have you read Pedro Salinas? Same generation and if you like Machado, you may like him as well.

As you find similarities and differences between Garcia Lorca and Machado, there is one point that may be of interest: both Garcia Lorca's and Machado's tragic deaths are related to the tragedy of the Spanish Civil War: Garcia Lorca was murdered by the 'National' (fascist) army, while Machado died in exile, few days after he crossed the Spanish-French border escaping from the war and the repression from the winning side. I think this is a great example of how wars in general, and very specially teh Spanish Civil War, have tragic consequences to almost anybody, regardless of their social background, lifestile, notoriety...

Lorca did not die. He was killed by Franco's phalangists. This distinction is very important in today's world. A world that is getting polarised between fascism of the American kind or the Islamic fundamentalist kind.

I'd not read anything by Antonio Machado so thanks for the post and the links. Should keep me busy for at least a couple of days.

Shoummo - "Lorca did not die. He was killed by Franco's phalangists." I did say in the second paragraph of my post that Lorca was assassinated by political opponents. I'm sorry to sound facetious, but even if I agree that he was murdered (which I clearly do), the fact remains that Lorca did die.

chandrahas, I agree with whatever you say and yes Lorca did die for he was assasinated. Anything, connected with Lorca's death touches a raw wound somewhere deep inside me and I react the way that I did. Apologies. BTW any suggestions on a good biography on Lorca. I have read one 'Lorca: A Dream of Life by Leslie Stainton' thats good only in patches and hardly discuss his work.

"Traveller, there are no paths. All paths are made by walking."