On Nico Slate's Gandhi's Search for the Perfect Diet 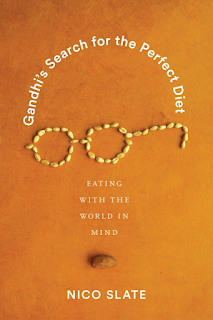 There are two kinds of people, the saying goes: those who eat to live, and those who live to eat. But over the course of a lifetime, each one of us is perhaps both kinds of person. One could just as easily discern a pattern in which human beings typically eat with a bias toward pleasure, taste, excess and conformity in the first half of their lives, before gradually listing towards seeing food through the prisms of health, nutritional value, novelty, and diversity, as well as dietary questions of a social and political nature and a sense of the importance of tradition in cooking and eating. Hyper-aware and pleasure- virtue-signalling moderns, we are sometimes both these people on the same day.
But whichever way you look at it, our relationship with diet and consumption is profoundly detailed and layered, encompassing our deepest, most primitive instincts, our childhood memories, centuries of culture and tradition, and large social and political crosscurrents. As our relationship to our own bodies and to the world changes over the course of a lifetime, so does our thinking about food.
And modern consumer society makes huge demands on our eating lives — both in the negative sense of continuously presenting us with scores of tempting food choices, many of them unhealthy, that we must discipline ourselves to resist, and in the more positive one of offering us culinary possibilities from the entire world and the chance to grow and learn from the experience of traditions not our own. In England, when I combine in a single morning a visit to Sainsbury’s with the South Asian and East Asian and Caribbean supermarkets, I often come away with the same feeling of gastronomic pleasure and possibility that I did intellectually as a student when I visited the Cambridge University Library (home to a few million books, and therefore all the knowledge acquired by humanity).
But I also find myself asking many questions, as I’m sure you do when you shop for food. Pleasurable though it is to eat, what is the carbon footprint of the Chinese pear or Brazilian mango in my shopping bag? Do microwave meals cut down time in the kitchen and allow harried parents a spot of leisure, or do they help create a convenience culture of culinary illiteracy and dependence on processed food? What food system is better for farmers and food sellers: The highly consolidated, corporatized, imports-oriented model of the West or the much more diversified and localized but disorderly one of India, with its millions of small farmers with a deep relationship to the land but without proper access to (or any power over) markets and often themselves living in food insecurity? With every meal that I put on the table, what ripples in the food universe do I create or participate in?

These questions have acquired a deeper resonance for me since reading Gandhi’s Search for the Perfect Diet, the American scholar Nico Slate’s deep, wise book about the eating life of one of the moral giants of the modern world. Very few people think of Mahatma Gandhi as an authority on food. His emaciated figure seems, if anything, to suggest a lifetime of ignoring the rich and varied culinary delights of the Indian subcontinent. And, of course, he was vegetarian too; he never knew the pleasure of a Lucknowi galouti kabab, a Bengali daab chingri, a Peshawari raan, a Konkani surmai rava fry, or a fiery Kerala crab roast. Sad.

But, as Slate shows, Gandhi was, in his own way, an extremely ambitious eater -- even a peculiar kind of gourmet -- continuously experimenting with new foods and new dietary combinations throughout his life. Although brought up in a strict vegetarian environment, he lived for 25 years of his adult life in vegetarian-unsympathetic England and South Africa, becoming part of the small vegetarian and radical countercultures in these countries (meaning that, even while eating less food than most, he had a more varied and cosmopolitan diet than most).
Food was an integral part of Gandhi’s politics and spirituality. Sometimes he changed his diet to identify with an oppressed community, such as when he started eating mealie pap, a corn porridge that was a staple of the Blacks of South Africa, after first resisting it when given it in jail. When the relationship between sugar, slavery and empire became clear to him, he stopped eating sweets. And when he wanted the people of India to rise up unitedly against the British Raj, he launched an agitation for their right to produce their own salt, a basic necessity of life that was produced and heavily taxed by the state.

A critic of many aspects of modernity, Gandhi also criticized the growing industrialization of food culture. He pointed out that eating highly processed food was not only unhealthy, but that it could also insulate the consumer from inequalities and injustices in the chain of production. The raw food, organic food and local food movements of our time can all find an ally in him.

Gandhi strived all his life for mastery of his palate, believing that gluttony was a symbol of indiscipline and spiritual corruption, not to mention unhealthy and unseemly in a world where so many people do not have enough food to eat. He was highly impressed by those who kept fasts, believing that fasting was not only good for health, but that it also developed self-mastery. Sometimes, Slate points out, his austerity and quest for dietary perfection could become obsessive — almost an egotism of sacrifice and renunciation. Yet he was alive to the social and pleasure-giving power of food and — for someone who ate so little — he gave, or attended, a surprisingly large number of dinner parties.
Most importantly, unlike many food (and other) crusaders of today, Gandhi was not arrogant and inflexible about his moral positions on diet. For such a passionate vegetarian, he was a greatly tolerant one. To those who defended meat-eating, he asked only that they make an effort to eat less meat. “Understanding Gandhi’s diet," writes Slate, "is… to connect two of history’s perennial questions: How to live and what to eat.” It might be hard for ordinary people like you and me to subject their diet to such rigor and moral ambition. But we could all do with inviting Gandhi, metaphorically speaking, to dinner.
And two old posts on The Middle Stage: on Rajmohan Gandhi's biography of Gandhi, and on Gandhi's autobiography.
Posted by Chandrahas at 4:12 PM