The Indian novel not yet translated into English that I most want to read...

...is Bibhutibhushan Bandyopadhyay's Adorsho Hindu Hotel (1940). Long-time readers of the Middle Stage will know what a great admirer I am of this Bengali novelist's poetics and fictional ethics (fictional as in "relating to the writing of fiction", not "fictitious"). I explain why I love him so much in this post from 2005, "The World of Bibhutibhushan Bandyopadhyay". In fact, if I could have a dinner party in which I could invite half a dozen writers from the length and breadth of literary history, the four certainties would be Adam Smith, Alexander Hamilton, Jorge Amado, and Bibhutibhushan.

Many of Bibhutibhushan's novels are translated into English, but one of the most famous, Adorsho Hindu Hotel, is as yet mysteriously untranslated. When I was Fiction & Poetry editor of The Caravan between 2012 and 2014, I used my small powers and privileges to commission to the great translator of Bengali literature Arunava Sinha to translate the first chapter of this book, and it was every bit as good as I'd anticipated. You can read it here, with a short introduction by myself: 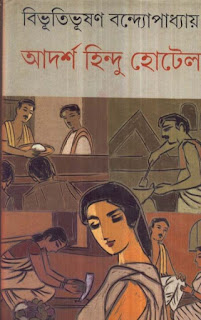 Arguably the twentieth-century Indian writer with the imagination and technical gifts most suited to the creation of great fiction, Bibhutibhushan Bandyopadhyay continues to enjoy renown across India—though unfortunately not elsewhere—for his stories and novels, written in his native Bengali.Every reader finds some new way to describe the legerdemain of Bibhutibhushan (as he is commonly known in Bengal). One interpretation holds that here is a narrative artist who seems to drop into the world of his characters and then become invisible, producing the illusion that the story is telling itself. His sympathy is so vast that each person touched by the roving lens of his fictional narration seems momentarily to turn into the protagonist of the story. The work of many great fiction writers seems somehow self-consciously literary, but not so with Bibhutibhushan, who prizes—and produces—narrativeness (a term used in literary theory), that mysterious quality of constant motion and confident verisimilitude that makes a reader forget he or she is reading a story.Here are the opening pages of one of Bibhutibhushan’s best novels, Adorsho Hindu Hotel. For a while, the narration holds the daily life of the hotel in focus. Then, from out of the picture, emerges the unforgettable figure of the cook Hajari, a middle-aged toiler and dreamer. “Why then did he weave these dreams every day here by the Churni?” the narrator asks. “Because it was pleasant, that was why.” No greater insight is required—and Hajari’s reasons are also the reasons why we read fiction.


Which Indian publisher will commission Arunava to translate the rest?
Posted by Chandrahas at 8:34 AM