Last weekend I gave my talk "Ten Ways In Which Novels Can Change My Life" in Panjim, Goa (and this Friday I'm giving it in Pune, details in the image below). The Navhind Times of Goa generously ran a long interview with me on the subject of novels that I reproduce here. 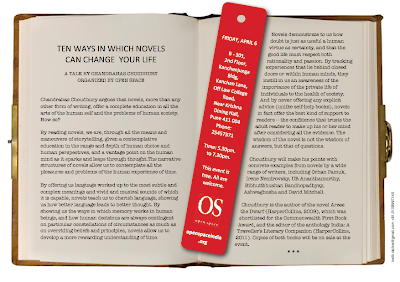 Life is not a novel. How does a piece of literature factor in the 'unpredictable' human streak?
Life is not a novel, but it is a story, and so is a novel. Both kinds of stories have a lot to give each other. Literature is interested in precisely what is unsystematic and unpredictable about human beings. But the next challenge is to find a way of portraying this unpredictability, persuasively.
There is the good, the bad and the ugly in literature. How would you classify literature into each of these categories and what according to you is the purpose of 'the ugly'?
To my mind there are two kinds of "ugly" in literature. There is that literature which tries to portray or understand or criticise all that is ugly about human nature, human institutions -- for example communal violence, violence in man-woman relations, the urge to think some human beings inferior to others. And of course there is some literature or art which is to my mind ugly in itself -- cynically or manipulatively written, perpetrating stereotypes of its own (for instance the stereotypes of Goans in Hindi movies), or full of other kinds of clichés of thought and language.
The present age has seen the emergence of Chick Lit in India. Is this devaluing literature?I wouldn't say so. Literature has value not in an a priori kind of way (such as, for instance, money) but only in terms of what it achieves between the time the first sentence of the book begins and the last line ends. In this space, whether it is literary novels, science fiction, or Chick Lit, a work may do something tremendously interesting and original. Some of what we think of now as great novels by women writers were considered Chick Lit when they came out. More important than the genre in which a book is written is the mind of the writer writing it.
What does modern Indian literature reflect of these times in India?I think modern Indian literature is tremendously interesting and diverse. It reflects a society that is changing very fast, interrogating (or trapped within) old ways of living and interrogating new ones. But it is the responsibility of the reader (and to my mind, also bookshops) to experience the full diversity of Indian literature by seeking (or displaying) literature in translation, books published by small presses, books by writers who are no longer alive to do publicity events for themselves! To make just a short list, I would say that if you were seriously interested in say, just the Indian novel today, you would have to have read at least one work each by Amitav Ghosh, Vikram Seth, Vikram Chandra, UR Ananthamurthy, Aravind Adiga, Kalpana Swaminathan, Bibhutibhushan Bandyopadhyay, Fakir Mohan Senapati, Qurratulain Hyder, Yashpal, Salma, Bankimchandra Chatterjee, Sankar, and Mahasweta Devi. From a list like this you would be able to piece together a tremendously interesting picture of modern India.
Compare Indian writing qualitatively (including use of language) vis-à-vis the early trio of Indian authors -- Mulk Raj Anand, R K Narayan and Raja Rao.
Narayan was of course a very original prose stylist, as was Raj Rao. I don't like Anand's work so much. Even so, I think contemporary writers are less self-conscious in their use of English today than many of their predecessors, and the best of them produce a more interesting sound that brings the rhythms of Indian life to English. I think older Indian writers tended to write more British "English" English. The work of my generation has a freer sound rooted in multiple influences across world literature.
Your take on regional literature.As I said earlier (and as I demonstrate with the short list of necessary Indian novels I offered), one cannot think of any map of Indian literature, whether as a writer or as a reader, without thinking about Indian writing in translation. I would not call writing in translation "regional" any more than writing in English is "regional".
Hollywood and European cinema draws heavily from literature. Why do we not see this same trend in India besides the few odd incidences like Chetan Bhagat claiming that 3 Idiots was based on his Five Point Someone.I think an older tradition of Hindi films did borrow stories heavily from Indian literature. I'm thinking, for instance, of one of my favourite Amitabh Bachchan films, Saudagar (1973), in which he plays the role of a trader of cane sugar. The film was based on a story called "Ras" by the Bengali writer Narendranath Mitra. Or Shyam Benegal's Suraj Ka Satvaan Ghoda, based on a novel by Dharamvir Bharati. As films have become more generic and more calculated, they have drifted away from literature, which is in its very spirit very individual and very specific. I don't know that there are that many serious readers in Hindi cinema any more - someone like Shyam Benegal or Ketan Mehta. But I do know that Mira Nair is currently making The Reluctant Fundamentalist from Mohsin Hamid's novel by the same name. I'd be very interested in seeing that because the book is a very interior one.
What aspect of human nature fascinates you the most and in which piece of literature according to you is this best showcased.I guess of all human relationships, I'm most interested in man-woman ones. The subject of how one can love (and give oneself away to) someone else over a period of time while also keeping to an independent trajectory -- to be both committed and single, as it were -- is an eternal question for adult human beings. One could make a small survey of the pleasures and problems of romantic attachment, for example, by reading Orhan Pamuk's The Museum of Innocence, Yashpal's Jhootha Sach, Irene Nemirovsky's All Our Worldly Goods, and Aamer Hussein's recent novel The Cloud Messenger.
Posted by Chandrahas at 2:22 PM

Also, your comment on Narayan being an original prose stylist, is very unsatisfying. Would love to hear you elaborate more on him.