Here are some things I've been reading recently that I thought I'd share with you:

"After The Fall", the historian Ramachandra Guha's marvellous long essay in this month's issue of The Caravan on the fall of the Left in Bengal and the future of the Left in India("In seeking to answer these questions, I shall start with the analysis of a printed text. This is apposite, since Marxists are as much in thrall to the printed word, or Word, as are fundamentalist Muslims or Christians. True, their God had more than one Messenger, and these messengers wrote multiple Holy Books. Withal, like Christianity and Islam, Marxism is a faith whose practice is very heavily determined by its texts. Thus, communists the world over justify their actions on the basis of this or that passage in the works of Marx, Engels, Lenin or Mao.") 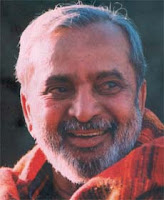 "What Does Translation Mean In India?" a very cogent essay by the Kannada novelist UR Ananthamurthy. Ananthamurthy points out that the Indian novelist, whether in English or in some other language, is almost always a translator because of the nature of Indian linguistic multiplicity and exchange at the level of everyday life ("Chomana dudi, a celebrated novel in Kannada by Shivaram Karanth, is written in Kannada. Choma the hero of the novel is an untouchable, and in real life he would be mostly speaking in Tulu. In fact, one could say much of the novel takes place in the language of Tulu, and the author Karanth while writing the novel is truly translating from Tulu into Kannada. I wonder if this is not true also of much of the good fiction in English written by us in India. Isn’t Salman Rushdie translating from Bombay Hindi in many of his creatively rich passages? The best effects of Arundathi Roy, I feel, lie in her great ability to mimic the Syrian Christian Malayalam. Raja Rao’s path-breaking Kanthapura, although it is written in English, is truly a Kannada novel in its texture as well as narrative mode—deriving both from the oral traditions of Karnataka. With most of the truly creative Indian novelists in English, who seem to have made a contribution to the way the language English is handled I would venture to make this remark: For them to create a unique work in English is to transcreate from an Indian language milieu.")

"Flight of the Eagles", one of the many crackling pieces written for the Mumbai tabloid Mid-Day by the journalist J Dey, the paper's Head of Investigations and an authority on the city's underworld, who was shot down in broad daylight by four assassins on motorbikes in Powai on June 11. The piece begins: "When the eagles are silent, the parrots begin to jabber, goes an old adage. The adage is especially apt when it comes to controlling crime in the city. The eagles -- encounter specialists --have been silent for far too long.'" This avian metaphor is extended through the length of the article, and raises images as vivid as that in any great short story or novel. Dey's intriguing reports ("Osama's Death Means That Dawood Lives Longer", "Seasoned Diesel Kingpin Arrested") are so good to read because of their attention to detail, their willingness to lay out a web of connections, their immersion in the city's language, and their sympathy for small fry -- the khabaris and the chindis -- in a big game.

"The Inward Eye", an essay by the historian Ananya Vajpeyi on the place of the poet Kabir in India's artistic, religious and intellectual traditions that takes as its springboard the poet Arvind Krishna Mehrotra's recent versions of Kabir ("Kabir for me conjures up the great multilingual chain of India’s poets, from Valmiki to Kalidasa to Tagore. He transports me to Banaras, a city of Sanskrit seminaries that has throughout the ages both drawn and persecuted the most talented Brahmins, from Tulsidas to Hazariprasad Dwivedi to Pankaj Mishra. He takes me into the fascinating vernacular domains of singers like Prahlad Tipanya, whose ceaseless journeys are so marvellously documented by the filmmaker, Shabnam Virmani. He opens the door to the complex anthropological worlds of Banaras, meticulously detailed by Nita Kumar, Philip Lutgendorf and Jonathan Parry, among others, and to its literary and intellectual history, as reconstructed by Namvar Singh, Purushottam Aggarwal, Vasudha Dalmia and Sheldon Pollock. The subtle, truant poetry of Kabir continually energizes Hindustani vocal music — from Bhimsen Joshi, to Kumar Gandharva, to Chhannulal Mishra, to Madhup Mudgal.")

"My Father's English Language", Martin Amis's very entertaining look at his father Kingsley Amis's book The King's English in an essay that is itself passionate about language ("Usage is irreversible. Once the integrity of a word is lost, no amount of grumbling and harrumphing can possibly restore it. The battle against illiteracies and barbarisms, and pedantries and genteelisms, is not a public battle. It takes place within the soul of every individual who minds about words.") and acute about its power ("We are all of us held together by words; and when words go, nothing much remains.")

"Why Tennyson Is Underrated", an essay by the limber and versatile poet and literary critic Eric Ormsby on the timelessness of Tennyson's verse, an argument he proves by some choice quotations, including these memorable lines from In Memoriam ("Old yew, which graspest at the stones/That name the underlying dead,/Thy fibres net the dreamless head,/Thy roots are wrapt about the bones."). The Underrated/Overrated series in Standpoint magazine has yielded some very provocative opinions, such as the one by Joseph Epstein on why he loves Willa Cather and can't bear Flaubert.
Posted by Chandrahas at 10:08 AM

Thanks for these links :) Particularly enjoyed the Amis article.. the father was a giant, and the son, at times, seems incapable of writing an uninteresting sentence. I would throw in my lot with Amis senior, though, when it comes to the "losing battle" between "Homogeneous" and "Homogenous" which are quite simply, two different words meaning different things. It was also fitting, I think, that Amis mixed up his diseases, as is revealed in the errata note at the end :)

Loved the article on translation by Ananthamurthy. Thanks.
I write in English, Italian and Hindi and the article made me reflect about my own personal way of passing between the three languages, whenever I write anything, even the captions to the imges in my trilingual blog.

Loved the article on translation by Ananthamurthy. Thanks.
I write in English, Italian and Hindi and the article made me reflect about my own personal way of passing between the three languages, whenever I write anything, even the captions to the imges in my trilingual blog.
http://www.priyaconstruction.net