On Not Coming Down From Trinity

Trinity College, Cambridge is, along with Hindu College, Delhi, one of two places where I learnt how to read and to write. A slightly different version of this short essay about my time at Trinity (2000-2003) appears in the new issue of the College's quarterly journal The Fountain, named after the college's most distinctive scene, the fountain in the middle of Great Court. 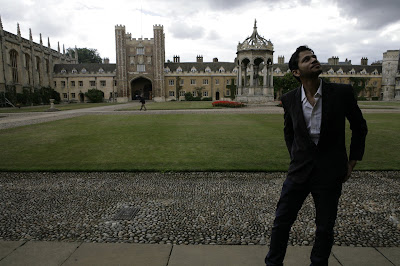 I came up to Trinity College in 2000, a raw, nervous, wide-eyed undergraduate in a foreign land for the first time in his life. I remember the beautiful reds and pinks of autumn leaves and their rustle underfoot, the crooked look of cobbled streets, waking on Sundays to the sound of church bells in Market Square, the perpetual misty patter of rain and talk of weather, my first long coat, the comprehension of new shades of meaning to the words "cheers", "massive" and "wicked" – and the pleasure of using my first-ever debit card and buying my first-ever frozen pizza.

At Trinity I was immediately set to read three Shakespeare plays a week under the eye of the formidable Shakespeare scholar Anne Barton – the intellectual equivalent of a student cricketer having to show off his cover drives to Sachin Tendulkar. My literary-critical progress was sluggish. The swiftest I moved that Michaelmas term was to chase down one of Dr Barton’s famous cats (each one named after a Shakespearean actor from the sixteenth century) when I carelessly left her door open. Whenever I enter New Court I still have to beat back my panic at the thought of a precious cat on the loose. 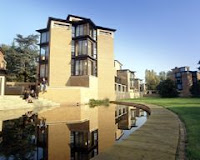 My second year at Trinity was the best year of my student life. My rooms overlooked the pond in sylvan Burrell's Field; not bells now but ducks sounded the start of day. I felt not only more confidence in my ability to read texts, but also a growing sense of a future working life and, more than that, of a vocation.

My rooms, beautiful in themselves with their light wood, high windows, and lovely views, also housed a serendipitous collection of fine books, most of them bought for a pound from the three-storeyed bookshop on Silver Street Galloway & Porter. Many of these books were beautiful editions of literature in translation published by the now defunct Harvill Press (amalgamated now into Harvill Secker), which offered me a parallel education to the more classically English one I was getting inside classrooms. This, I think, made me more agile when after three years I returned home to begin work in another kind of English literature: Indian literature in English. On a visit to Cambridge last August, I headed towards G & P and was dismayed to see that this pillar of my education had shut down.

From K3 Burrell's Field, the University Library was just two minutes away, and I could have any book I wanted in half an hour—an ease of access to intellectual riches I greatly miss today. The circle of lectures, supervisions, friendships, and connections deepened my comprehension of Things That Must Be Understood, and set up a life of dialogue that I continue today in essays and reviews, as well as in my own books.

That year I also bought, with savings from my scholarship, a second-hand IBM laptop, a hardy little machine which allowed me the luxury of typing out my essays in my own room (previously I had used the computer room) and the thrill of reading the world’s literary journals online. This machine held up for seven years, till 2008; all the early drafts of my novel Arzee the Dwarf were composed on it.

It was by reading, while drinking the strong coppery tea you could make if you used Sainsbury's Kenya teabags, and sometimes stopping mid-sentence to answer a pebble thrown against a window by a friend, the literary pages of journals like The New Republic, The New Criterion, The Atlantic Monthly and The Partisan Review on my Thinkpad during these years that I taught myself how to write passable literary criticism. My time at Trinity was also the year I began my adventures in book-reviewing—a necessary part of any writer's trade if he is to live by words alone. Today the pleasure of fat packages of books arriving by post always stirs memories of books lying in my college pigeonhole.

At Trinity I also began, after a hiatus of several years, to play cricket seriously for both college and a local club. I still feel a twitch whenever May comes around and the memories return: green grass, blue skies, seasoned wood, red leather, cricket whites, and tuna and cheddar cheese sandwiches at tea. The captaincy of the Trinity Third chess team (which mainly involved custodianship of five chess sets and five clocks) led to several pitched battles in the university leagues from which our band of five emerged with distinction—except for one disastrous encounter with the ruthless mathmos and natscis of Trinity Seconds.

All this seems far away now, but it was at Trinity, and Cambridge, that I first glimpsed the possibilities of a life in which literature could always be the most important thing and not just a phase, and the means to this end. I came away with the confidence to work independently, and the realization that my degree, taken on one knee before Dr.Amartya Sen in Senate House, was not so much the culmination of student life as the training to be a student all of one's life. In Arzee the Dwarf Arzee, full of good feelings on a big day in his life, jumps over a wheelbarrow lying on the street, and "almost does not come down". My three years at Trinity were, similarly, a big leap for me, one from which I hope I will never come down.
Posted by Chandrahas at 9:26 AM

Email ThisBlogThis!Share to TwitterShare to FacebookShare to Pinterest
Labels: Arzee the Dwarf, Autobiographical

Thank you for sharing that :). Some parts struck a chord while more importantly, other parts inspired.

I've been following your blog for a while and I really loved this personal post re Trinity. Keep us entertained with your words and reviews.

What a lovely post - an photograph(s)! It inspired me to stop lurking and comment after all these years of following your blog. Was most dejected when I missed your launch in Bangalore, please do come back here to talk sometime.

Hey Chandrahas, I read the blog entry on your Trinity days during a rather serious fit of melancholy, and the nostalgic warmth of it helped me snap out of the blues trip for a little while and blink at the sunlight. So thank you for that!

Chandrahas, What a lovely account of your Trinity days. I am not a regular here, but I am glad I decided to stop by today :) -- Pallavi Sharma

How utterly lovely. The 'not-coming-down' feeling that you concluded with really tinged my student days in England as well. I'm always up for comfortable nostalgia, and your piece provided for an almost perfect interlude.

I can't even begin to describe how jealous I feel of you, not just envious but pure scorching jealous. Anyways, I want to buy your book, too bad I am not in India now.

nice to read that now Anne Barton has sadly passed away