On the Auto-rickshaw Drivers of Bombay 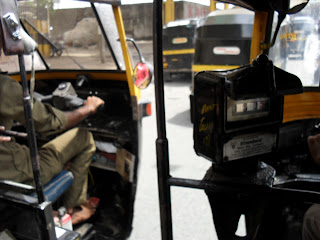 I always like chatting with the auto-rickshaw drivers of Bombay. Over the course of this year I decided to pursue these conversations in a slightly more structured way, leading each one of them in the direction of a common set of questions, and to write up our conversations into a long essay.

This essay appears in the December issue of The Caravan, and can be read in full here. Here is a short excerpt:
And here are some more essays from my travels over the last two years:

"Under The BJP's Big Tent", a report from the BJP national convention in February this year ("Further into my twenties, as my own understanding of Indian politics and society expanded, the party’s view of Indian history and culture came to seem ever less satisfactory. Yet, through my interactions with people and on my travels, I had come to be intrigued, both as an observer of politics and as a novelist, by the narrative power exerted by the party’s founding fiction on the minds of many middle-class Indians like myself. This was the idea that Indian culture is rooted in a Hindu ethos and worldview, and that Indian Hindus, because a double-standard secularism that ignored the sentiments of the majority community, were disorganised, defensive about their faith, and therefore accomplices in the desertion of the central principle of their civilizational history.");

"At The Sun Temple of Modhera" ("Descending, I feel as if heaven and earth have exchanged places; I go past level after level of sharp-nosed, full-figured, deities reverentially captured in different poses, faces serene or half-smiling, eyes darting left and right, legs splayed or crossed, arms delicately outstretched or holding up weapons or musical instruments. Every wall, pillar, arch, or nook in the bav ripples with the agitation of faces and limbs suspended forever in stone, and as the day progresses the sun begins at the western face of the well and works its way downwards to light up this rapturous panorama level by level");

and a trip to Kanha National Park in Madhya Pradesh ("Thus it was that, over two six-hour mornings in the woods, this writer, who hitherto could only recognise such two-legged creatures of his native urban habitat as the Jostling Traincatcher, the Horn-Happy Motorist, the Beautiful Passing Lady and the Common Loafer, suddenly became alive to the beauties of the leaping air-dashes of the white-tailed paradise flycatcher, the hushed, monastic vigil of the crested serpent eagle, the breathtaking mid-air halt of the black-shouldered kite, the mellifluous call of the white-rumped shama, and the whooping of the racket-tailed drongo...").

Posted by Chandrahas at 3:01 PM

What a lovely piece. This essay confirms Chandrahas’s growing stature as the one of the best young Indian writers in English. The rickshaw drivers in most Indian cities are despised by their passengers – in Bangalore, for instance groups on Facebook routinely call for observing ‘ban the rickshaw today’ days, and it takes great empathy to sympathize with their lot. Chandrahas manages to do this very well, and the ‘literariness’ of the piece nicely complements the human interest aspect of the story: not only did I love the humor in the story, I also enjoyed the dialogues: each of them conveying not only a sense of who the drivers are, but also creating in our minds a view of the city.

Great going, Chandrahas – keep it up!

PS: I am sure every passenger in Mumbai has a story to narrate about the autorickshaw drivers. I have several, but will pick this one: in 2000, a sat behind open-mouthed as the rickshaw driver explained the different types of capacitors and their functions in various devices. The driver was a ITI pass-out and in his spare time helped his brother (who was an auto rickshaw driver).