Things I've been reading, new books received, Badrinath on the Mahabharata, and Naissance

Some things I've been reading recently: Simon Schama's splendid essay on our need for art, "Unnatural Beauty" ("Art replaces seen reality rather than reproduces it"; "Art is life under new management - the management of picturing's resident conventions: coherence, harmony, tonal balance"), and, less sympathetically, Vijay Nair's recently published piece in the Hindu about India's three recent Booker Prize winners , "And the winner is...".

Nair argues that, given our colonial past, the fact of an Indian writer winning the Booker for a novel in English "qualifies as the ultimate act of subversion" ("English writers vie for the same prize and that makes the victory sweeter"). But back in India these writers encounter only the hostility and resentment of the press and of Indian readers, ostensibly because they portray harsh truths that we would not like to acknowledge.

Given that Salman Rushdie's Midnight's Children won the Booker in 1981, inaugurating a new era for novels from the Indian subcontinent (particularly those in English), Nair's view of Indian literary accomplishment as it impacts the Western literary world is, to my mind, nearly three decades out of date. And even as his piece celebrates the subversion of the established Anglophone literary order, which is forced to concede one of its highest prizes to writers from former subject nations, it also ends up perpetuating the very categories that it enjoys seeing subverted, since, if for some reason these novels had not been awarded the Booker Prize, there would have been no reason to celebrate them as amongst our best books. While it is true that literature cannot be divorced from politics, this does not seem like a literary politics that can take one very far, or any closer towards making independent judgements.

I found it entirely characteristic of Nair's argument, then, that he allows for no literary reasons for Indian readers and critics not liking one or the other of these books, only political or personal ones. I thought Shashi Deshpande's rejoinder to Nair in the same newspaper last week, "Debating Spaces", a very clear and cogent response. 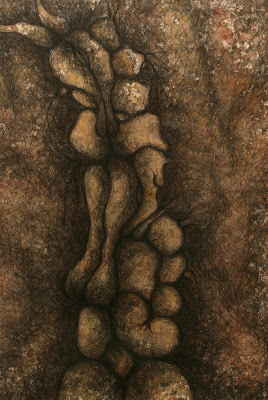 Also, I have been attending some very good events at the Kala Ghoda literary festival, and wanted to say that if you are at the festival any day between the 12th and the 14th of February, drop by at Nyela Saeed's exhibition of paintings Naissance, about which I'd posted a short text here in November (the show had to be cancelled then because of the terrorist attacks). The works are on view from 11 am to 6.30 pm at Kitab Mahal building (192, DN Road, 4th Floor, Fort, Mumbai-400001), which is just opposite Central Camera as you go down the road from CST station towards Flora Fountain. Art's deepest urge 'is to trap fugitive vision and passing sensation", writes Schama, and it seems to me that these paintings do just that.

Lastly, some great new books have turned up at my door in the last month from all over the world: Chaturvedi Badrinath's The Women of the Mahabharata (here is Badrinath's short essay "The Karma Conundrum", which quotes the sixth-century text the Yoga-vashishtha on the subject of fate, "There is no refuge other than the conquest of the mind") ; the Turkish novelist Ahmet Hamdi Tanpinar's classic novel A Mind At Peace (translated by Erdag Göknar, who is also the man behind the brilliant English translation of Orhan Pamuk's My Name Is Red); the Israeli novelist S.Yizhar's Khirbet Khizeh (judgement on Yizhar's prose style is pending, but what a great hairstyle!); the Dalit writer Baby Kamble's autobiography The Prisons We Broke; and the Canadian poet and classicist Anne Carson's translation of three versions of the same story of vengeance by Aeschylus, Sophocles, and Euripides, An Oresteia (some of Carson's translations of Sappho are here, with the original Greek text alongside).

I hope to be able to write about most of these in greater detail soon, but for now here is a paragraph from the introduction to Badrinath's book, on the relationship between truth and empathy:

[I]n bringing up the undeniable paradox that the personal can be understood in the light only of the impersonal, the Mahabharata does not ever disperse the individual, the person, into some grand philosophical abstraction. Truth does transcend the mere personal, but it does not for that reason become unfeeling. It is a gross insult to a human being to answer his, or her, dismay, outrage, unhappiness, suffering, by saying: 'but remember that life is transitory, a huge illusion, and so is your unhappiness and pain', or by delivering a discourse on the origins of suffering, or by talking of the wisdom of forgiveness and reconciliation always....Some of the women of the Mahabharata show how, when expressed without feeling, grand truths produce the greatest untruths of all.

I was also intrigued by Badrinath's idea that "Irony is the laughter of truth", and his contention that "In being a most systematic philosophic inquiry into the human condition, the Mahabharata does not see the meaning of a story in the way it ends. The particular end of a story is not the whole of its meaning."
Posted by Chandrahas at 6:15 PM

Did you finally read The Women of the Mahabharata? I would love to read your thoughts/review.

Vishal - I haven't finished it yet, but I read a chapter from it every now and then. It's a great book, and I recommend it unhesitatingly. It'll be a while before I manage to write something on it though.