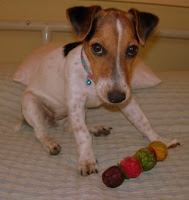 Although my Uncledom is expanding rapidly and now encompasses perhaps a dozen one- and two-year-olds across India and England, I am the godfather, as far as I know, of only one living being: Zoey, the dog of my friend Sonia Faleiro.
I happened to be around when little Zoetta arrived as a shivering pup in the Faleiro McKnight household in 2006, and we have been fast friends since. Our favourite activity is called Tuggies, and involves holding on to either end of a squeaky toy - sometimes a hedgehog, sometimes a chicken, sometimes a fake kabab like the one pictured above - and tugging away for hours, growling unpleasantly as we strive for complete control of the vastly valuable prize. No guest to the household can leave now without first having played a game of Tuggies in the right spirit.
To thank me for my time, Zoey reads The Middle Stage every week over the shoulder of one or the other of her parents. She recently wrote to me saying that the post she likes the best is this old one on boots, which she is a great fan of, having chewed up some.
Lastly, I am pleased to report that Zoey will soon turn two, and is going to have a dazzling birthday party (to which you might give yourself a chance of getting invited by leaving complimentary remarks on her blog). Also, under my tutelage Zoey has taken to composing verse in rhyming couplets, and you will find her first, promising bit of doggerel — the word loses all its pejorative associations when a real canine is involved — composed with a little help from a friend, here. I wouldn't say it's brilliant, but hey — even Emily Dickinson and Sylvia Plath had to begin somewhere.
The first lines of the poem are "I think of cats, hung by tail from hooks/ Exactly ready for the attention of cooks". Some of the lines have a Yankee twang, which comes from too many hours spent beside Momma watching American Idol and news of the Democratic primaries on CNN (Zoey is now the head of the Indian chapter of the group "Animals For Obama", in which, keeping up the inclusive spirit of Obama's campaign, many human beings are also registered).
Posted by Chandrahas at 3:16 PM

Shankar - You are invited to Zoey's birthday party. Also, Zoey made a list of presents she would like and has just been drawing lots with the names of guests, and she has asked me to tell you that you are the lucky one who gets to buy her a leg of lamb. Don't bother with giftwrapping though.

For what it's worth, I'm also the child's godfather. But I'm not her favourite godfather because some other godfather wrote a bloody poem about her. Garrumph!

Amit - Never be upset, there is room here for all of us. After all, Francis Ford Coppola had three Godfathers, so why can't Zoey have two?

As for who is the favourite between them, that may change depending on what we buy her for her birthday. But even there you don't have it so easy, because from what I remember of the list she had drawn up there was "gold-plated bone-shaped pendant with 'Z' engraved" written down next to AV.

Little Zoey would never be so greedy. I smell her momma's grimy hand behind that birthday list. Hmmm...

Also, she has three godfathers. There's some Bhatia fellow in addition to us. Know the guy?