Speeches in Manipal, and thoughts of England 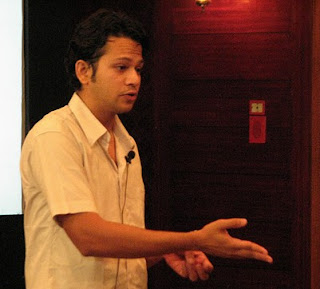 Also, as writing is all labour, premeditation, slowness, and revision, I find that the experience of speaking extempore, letting each sentence find the next, can be quite a liberating one.

And as summer arrives outside my window, so, I find, do thoughts of England: the country half-glimpsed under low scudding clouds from the plane window; waiting for the coach to Cambridge at Heathrow airport; the beautiful faces of old friends; babies newly born, or on the way, or grown beyond belief between the last time and this time; walks by the Cam river, the grass bright with ducks in lines almost as orderly as those of people in stores and stations; the world floating by on a punt; hours in secondhand bookshops and warehouse sales; rare books hunted down in libraries, four-digit PINs in ATMs; shopping in Sainsbury's; proliferating pleases and thank yous; precious invitations to high table; the chatter of people outside Trinity Great Gate; cricket in whites under a blue sky on a green field; water drunk straight from the tap; the smell of grass and pollen; the continuously changing light; loamy beer in dim and woody pubs; memories of women loved, or only admired from a distance; nights of conversation and catching up and old tales retold; long journeys on the top deck of London buses; crooked lanes and sculpted hedges; the Sunday papers fat as sheep; the pleasurable accents and stresses of many kinds of musical English; Scotch eggs, rashers of bacon, trifle, cheesecake, scones with cream, ginger ale, and lambrusco; washing up, because there are no maids; samosas at Baker Street station; phone calls to newspapers and magazines asking for work — new footprints on old sand.

'Tis time to be buying a ticket.
And some other past-centred posts: "A Harold Pinter story", and "Memories of a Borges book, and the old Twentieth Century bookshop".
Posted by Chandrahas at 11:54 AM

Email ThisBlogThis!Share to TwitterShare to FacebookShare to Pinterest
Labels: Autobiographical

I really liked this - "new footprints on old sand..."

You must like England more than the people who live here-I can understand the walks by the river and the cricket in the park-blue sky?-but shopping in Sainsbury's!? Did you enjoy it this much as a student, or maybe this is a case of selective memory? And was surprised to see the omission of movies at the Arts, garden parties, picnics along the backs, coffees in bookshops, alcohol-fuelled discussions and curry cooking for gentiles. Anyway, looking forward to seeing you in the summer

Michalis - The first time I entered Sainsbury's I barely knew how to cook, but by the time I left England I was really in a position to use all its resources. So I suppose you could say that Sainsbury's is for me the food equivalent of the University Library: the place which served as a resource pool for my my cooking degree.

Also British people stand so patiently in lines, unlike Indians who are always moaning and grumbling and trying to cut in in the middle. And the girls at the counters are often so pretty.

I will miss all the garden parties this year because I won't be there before term is over, so I figured there was no point in feeling nostalgic for them.

The Arts picture house has become too expensive for me now, and I don't go to the movies so much any more. If you like we can go the Galloway & Porter sale, making sure to leave by nine o'clock in the morning so we get the first crack at the books.

In short, I spend too little time in England to be able to see the negative things about it. I have a grand time, everything seems new all over again, and then it's time to go home.