On Ilan Stavans's Love and Language

My review of Ilan Stavans's Love and Language appeared last weekend in the San Francisco Chronicle. 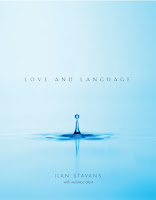 Two of the prolific and polyglot scholar Ilan Stavans' previous books are titled On Borrowed Words and Dictionary Days, so it is no surprise that his latest work, a disquisition on love in the form of a dialogue with the translator Veronica Albin, is also replete with word clusters and etymological burrowings, and connects the emotion and its expression with the title Love and Language.
This is because for Stavans, the limit of our language is also the limit of the world - an idea that led this reader back to Allan Bloom's complaint in his book Love and Friendship, which covers roughly the same territory as Stavans' volume but through a focused reading of a dozen great texts, that "there is an impoverishment today in our language about what used to be understood as life's most interesting experience, and this almost necessarily bespeaks an impoverishment of feeling."
Although Stavans is not as agitated as Bloom, implicit in his work, too, is the notion that an antidote to love's debasement as both word and feeling may be supplied by literature, mythology and the history of ideas. Stavans avers that humankind's understanding of love is in constant flux ("Who can prove what Cleopatra felt for Antony is the same as what Heloise felt for Abelard?"), demonstrating in an enthusiastic and sometimes idiosyncratic survey how economic and social conditions, religious strictures and literary and artistic tropes have led to love being understood very differently across time and across cultures.
Stavans sees romantic love, which is what the word "love" brings most immediately to mind in our culture, as being only the third of a set of concentric circles, flanked by self-love and love of family on one side and love of God and love of community (or in its modern form, of country) on the other. This is useful not just for the aptness of the geometric metaphor - the circle is the most pervasive emblem of love, such as Plato's theory in the Symposium of love as two sundered halves meeting - but also as a reminder that desire must be schooled by the tough demands of self and family before it can successfully engage with the other. Stavans quotes Alexander Pope: "Self-love, the spring of motion, acts the soul."
Yet the thrill and the thrall of romantic love are unlike that of any other. The marvel of it is not just that we are so powerfully, and sometimes enduringly, sucked out of our orbits by another human being; there is also the extent to which, belying all logic, we venerate and idealize the loved one, finding beauty in his or her simplest word or gesture. As Simone Weil wrote, "Two things cannot be reduced to any rationalizing: time and beauty." Stavans rightly criticizes reductionist explanations of love based on biological or psychological theories. Freud, he asserts, may have revolutionized our understanding of sexuality, but not of love. On the contrary, his theories drain love of its sublime element.
The metaphors of poetry, Stavans suggests, may provide a more accurate map of love than any scientific treatise. This brings up one of the central ideas of the book, which is that love and literature are inextricably connected. Drawing on Octavio Paz (to whom he has been compared), Stavans notes how the erotic act and the poetic act both have their roots in the power and fecundity of the human imagination. "Imagination turns sex into ceremony and rite, language into rhythm and metaphor." And it is to language - a system of sounds that gives material expression to nonmaterial things - that we turn, even if inarticulately, to give expression to the ravishment of love.
If there is a fault with Love and Language, it is that Stavans is perhaps too erudite for his own good. This creates two related problems. One is the rambling and associative nature of his meditations. Digression is, of course, more typical of dialogue than of writing, but while the ones here are diverting, they not always productive. On a number of occasions, names and incidents are called up in a somewhat perfunctory fashion, as if more from serendipity than choice. Sometimes the many peripheral details supplied by Stavans ("Walter Benjamin, called by Terry Eagleton 'the Marxist Rabbi,' who committed suicide in Port Bou, Spain...") unravel the tension of the text.
The other problem is that Love and Language is essentially a work of intelligent synthesis, and therefore a little more placid than is ideal given the fevers and disquiets prompted by its subject. Other than his contention that Socrates was not so much a tragic hero executed on a motivated charge as a highly aware martyr, Stavans does not really get his hands dirty. He has backers for all his ideas, and so his inquiry becomes a little too bookish. There is plenty of talk of love in this work, but the shock of love is sometimes too much at a distance.
An excerpt from Love and Language can be found here.
And here are some old reviews for the Chronicle (these incidentally are three of the best novels I have had the privilege of writing about): Sandor Marai's Casanova in Bolzano, Leila Aboulela's Minaret, and Malika Mokeddem's Century of Locusts.
Posted by Chandrahas at 9:08 AM

If fevers and disquiet is what you seek, then you can of course do no better than Roland Barthes on the same subject...

Equivocal - I've managed to access the fevers and disquiets direct, without having to go through books. But since natures as helpful as yours should never be rebuffed, what Barthes books would you recommend and why? I never knew that Barthes was a guru of love.

The book in question is Barthes' 'A Lover's Discourse'. Excerpts can be read here: http://www.koolpages.com/almalaika/Barthes.html

But WARNING: do not read this book to find assurance or comfort from your fevers and disquiet. All it will do is painfully and accurately elaborate on all the things you know but are not willing to accept.

Equivocal - You clearly have vast experience not just of books but also of life; you have crossed over to the other side. I'm still in the grip of many illusions and fancies that I would rather not have disturbed right away.

Right now, about the biggest thing that I "know but am not willing to accept" is that my nose is a bit bigger than I would like. Can Barthes be of any help with this? I'll negotiate the hazards of love by myself.

C: Barthes may not have much to say re. your discomfort with the size of your nose; but I think Freud will help. And for my part, let me just reassure you that, after a little more experience, you will probably not only cease to feel uncomfortable about the immoderate size of your nose but also see that, in some situations, it might actually be of use.

In the mean time, here's another quote from the Barthes that I copied into my notebook, about the loquela-- the lover's ritual twiddling of his wound, making it more painful, actually preventing it from healing, as a way to prove to himself that he is a capable of love and passion, to affirm that his feelings aren't merely illusion:

[note-- my interest in this book is purely academic, a distant, cerebral interest in french frog theory, and has nothing at all to do with experience. In fact, I have never experienced the loquela. Never ever. Never ever ever.]:

"I take a role: I am the one who is going to cry: I am my own theatre. And seeing me cry in this way makes me cry all the more; and if the tears tend to decrease, I quickly repeat to myself the lacerating phrase that will set them flowing again. I have two speakers in myself, busy raising the tone, from one utterance to the next... there is a bliss in doubled, redoubled speech, taken to the final din (the clown scene).

"...Or again: the autistic child frequently watches his own fingers touching objects (but does not watch the objects themselves): this is twiddling (Bettelheim), which is not a form of play but a ritual manipulation, marked by stereotypical and compulsive features. As with the lover suffering from the loquela: he twiddles his wound."