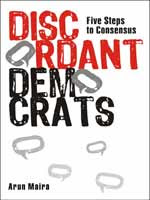 The title of Arun Maira's book Discordant Democrats might strike some readers as a tautology. After all, as the philosopher Sidney Hook has argued, in a true democracy the idea that in some crucial respects all men are equal must be complemented "by a belief in the value of difference, variety and uniqueness". If this is so - and India in particular is a fairground of difference, variety and uniqueness - then how can democracy not be discordant? The word "discordant" in this context is not necessarily the negative value that it would be with an orchestra, a cricket team, or a firm.

Yet the concern advanced by Maira, formerly an industrial executive and currently chairman of The Boston Consulting Group, India, is that Indian democracy is so fractious and unruly that it detracts from development. The parallel that pops up in his book, as it often does in discussions about Asia, is that of undemocratic China, which has put together world-class infrastructure within the span of a generation. By contrast, people entering the city from Mumbai's airport face eyesores, traffic snarls, and other signs of retarded development. Yet, as India has chosen the democratic way of life, there is no alternative to democracy; the only hope is to better it.

"[T]he improvement of democratic decision-making must be the agenda," argues Maira, "for Indians who want to accelerate the country's progress." It is with this specific problem in mind that he suggests five graduated steps for better debate and building consensus. These steps, he suggests, are like the gears of a car: some are to help us take off, but we cannot accelerate unless we move further down the chain of successful problem-solving. Readers will want to decide for themselves whether they find Maira's ideas about such concepts as aspiring, realizing and framing helpful.

Maira is a widely read man - among the many writers he cites in his book are Fareed Zakaria, Lewis Lapham, Jonathan Schell, Tariq Ali, and Thomas Friedman. Sometimes his survey or what other people have written can be insightful, such as when he cites the Dutch political scientist Arend Lijphart's classification of democracies into majoritarian ones, in which a stable two-party system is the norm, and consensus ones, in which power is divided between many competing players as in India. Intuition suggests that consensus democracies are slower and more inefficient, but in truth such democracies also manifest many good qualities, because forging a consensus means to some extent listening or deferring to the other side. When thinking about the pros and cons of fractured mandates of the kind widely seen in our era of coalition politics, it is useful to have information like this at hand.

Yet all too often Maira's book feels unhelpful, because it is too general. Maira's background is that of the corporate world, and the tone of his book is that of a self-help manual for managers. Many of the examples of successful conflict resolution Maira cites come from seminars and leadership conclaves he has attended. "Listening, like the atom, seems a very small thing. Yet it has enormous power to change the world," he counsels. On another occasion he writes, "In this scenario, many people rise like fireflies - living lights - all over the country and begin to transform darkness into light, despair into hope and passivity into action." Perhaps I do Maira a disfavour here by quoting him out of context, but his approach strikes me as a little too roseate. Like many management gurus, Maira also has a weakness for generating catchy acronyms, such as the concept of PLU ("People Like Us", or the tendency of people to assume conformity with their own values) and that of WMD ("Ways of Mass Dialogue").

But the fallacy manifest in Maira's book is also a PLM (People Like Me) kind, which assumes that all the actors in Indian democracy are committed to liberal values and to democratic debate and consensus - that they have the will but perhaps not the skill, which they can learn by adopting his "five steps to consensus". By doing so, he greatly simplifies matters. But, six decades after our experiment with democracy began, BR Ambedkar's assertion that "Democracy in India is only a top-dressing on an Indian soil which is essentially undemocratic" still remains acutely true today.

The real problem with India may be not so much that it is a nation of discordant democrats, but rather that it is under pressure on all sides from forces who do not subscribe to or have lost faith in the resolution of disputes by democratic and non-violent means. In other words, the weakness of Indian democracy is less that it is impracticably discordant and more that it is insufficiently deep-rooted - democracy is not yet for us a way of life. The failure to frame the problem properly makes Maira's treatise a well-intentioned but somewhat inadequate one.

And some essays: "Downloading Democracy" by the historian Robert Conquest ("Democracy is almost invariably criticized by revolutionaries for the blemishes found in any real example, as compared with the grand abstraction of the mere word. Real politics is full of what it would be charitable to call imperfections"); "The Guru of Hate", an essay by Ramachandra Guha on the still-influential Hindu ideologue MS Golwalkar, who thought democracy was alien to Hindu ethos and extolled the laws of Manu; "Democracy and Its Global Roots" by Amartya Sen; "Fears for Democracy in India" by Martha Nussbaum, whose book on India The Clash Within is just out from Harvard University Press; and "Nehru's Faith" by Sunil Khilnani.

And some old Middle Stage posts on writers dealing with aspects of Indian society and politics: Ashis Nandy, Krishna Kripalani, Pankaj Mishra, Minoo Masani and Amartya Sen.
A shorter version of this piece appears today in Mint.
Posted by Chandrahas at 8:31 AM

Indian Democracy raises two issues IMO: one is that democracy clearly does not maximise welfare atleast for nascent post-colonial nations and two, whether an alternative,say benevolent authoritarianism(with elements of Turkish secularism and East Asian bootstrap development)was ever possible in a heterodox artificial construct like India. Love ur blog and look forward to future enlightenment.

Rohit - Yes, if but if you look around at the rest of South Asia, you realise that we're not in such a bad place after all. If democracy has not maximised welfare, at least it has provided a degree of political stability, and in some small measure reduced some of the iniquities of our past, some going back thousands of years.

Thanks very much for your kind words. Yes, when I look at my blog, the thought strikes me that it's not everything that I wanted it to be - I can't take it for a walk, like I could a dog; it won't cook meals when I'm busy working, as a wife might, though one can't be sure in these times; and worst of all not even that many people read it, and when they do they don't write nice comments as you so kindly have done - but, like Indian democracy, it's not all that bad either.

Come on! Criticism is just an indicator that you ARE being read. Feel flattered and keep at it!

Democracy requires tremendous organization to channel and follow up on dialogue/discussion. I agree with your view that thinking should be channeled in 'how to achieve this' rather than 'we need to achieve this'. Even in the corporate world effective collaboration is a dream irrespective of the volumes of literature on the subject and the tools of IT.

In the public domain, to begin with, it would be a great start if the democratic way were to be adopted by our bureaucrats. They are organized and influential and can act. Drucker in his 'Coming of the New Organization', HBR, Jan.-Feb., 1988, lauds the use of dialogue by the Indian colonial administration to achieve results that the mandarin population of China could not deliver. From the interaction I have had with our current crop of bureaucrats I would say they have lost the meaning of dialogue and are in no hurry to pursue democracy.

We do have limited democracy only and it’s understandable.
We don’t have internal democracy in any political party.
It is well now how the candidates, ministers and chief ministers are selected.
It’s the so called high command which decides almost every thing.
The present crop of politicians represents and uses the weaknesses for selfish ends alone.
Most common weaknesses of the system is throttle infusion of new blood, when it’s needed most.
Shameful personal motives and priorities tilt the balance in favor of status quo only.
Still we all must be thankful that whatever it is we have it.
Lessons from across the border do tell their own pathetic story.