The zany fictions of Etgar Keret

The short stories of the Israeli writer Etgar Keret are among the more unusual pleasures in contemporary fiction. They really are short, often no more than two or three pages, and while writers from Keret's land are supposed always to be dealing with Serious Things, Keret's characters are more likely to be found playing cards with dwarfs, getting stuck onto ceilings with Superglue, or buying their fathers gold-plated navel cleaners on their birthdays.

Mostly Keret's stories are triumphs of "voice". The film writer Rick Groen once wrote of the Finnish director Aki Kaurismaki (The Man Without a Past, Drifting Clouds) that a Kaurismaki film was "invariably a whole lot easier to appreciate than to describe", and that is what made it so intrinsically a film - its power could not be experienced except by seeing it. The same could be said of Keret's stories - the pleasure lies not so much in any summarisable content, or plotline, as in a quirky attitude towards life expressed sentence by sentence through the individual details of the narration.

So here, in its entirety, is the Keret story "Pipes", in Miriam Shlesinger's translation from the Hebrew:

When I got to seventh grade, they had a psychologist come to school and put us through a bunch of adjustment tests. He showed me twenty different flashcards, one by one, and asked me what was wrong with the pictures. They all seemed fine to me, but he insisted and showed me the first picture again—the one with the kid in it. “What’s wrong with this picture?” he asked in a tired voice. I told him the picture seemed fine. He got really mad and said, “Can’t you see the boy in the picture doesn’t have any ears?” The truth is that when I looked at the picture again, I did see that the kid had no ears. But the picture still seemed fine to me. The psychologist classed me as “suffering from severe perceptual disorders,” and had me transferred to carpentry school. When I got there, it turned out I was allergic to sawdust, so they transferred me to metalworking class. I was pretty good at it, but I didn’t really enjoy it. To tell the truth, I didn’t really enjoy anything in particular. When I finished school, I started working in a factory that made pipes. My boss was an engineer with a diploma from a top technical college. A brilliant guy. If you showed him a picture of a kid without ears or something like that, he’d figure it out in no time.

After work I’d stay on at the factory and make myself odd-shaped pipes, winding ones that looked like curled-up snakes, and I’d roll marbles through them. I know it sounds like a dumb thing to do, and I didn’t even enjoy it, but I went on doing it anyway.

One night I made a pipe that was really complicated, with lots of twists and turns in it, and when I rolled a marble in, it didn’t come out at the other end. At first I thought it was just stuck in the middle, but after I tried it with about twenty more marbles, I realized they were simply disappearing. I know that everything I say sounds kind of stupid. I mean everyone knows that marbles don’t just disappear, but when I saw the marbles go in at one end of the pipe and not come out at the other end, it didn’t even strike me as strange. It seemed perfectly ok actually. That was when I decided to make myself a bigger pipe, in the same shape, and to crawl into it until I disappeared. When the idea came to me, I was so happy that I started laughing out loud. I think it was the first time in my entire life that I laughed.

From that day on, I worked on my giant pipe. Every evening I’d work on it, and in the morning I’d hide the parts in the storeroom. It took me twenty days to finish making it. On the last night it took me five hours to assemble it, and it took up about half the shop floor.

When I saw it all in one piece, waiting for me, I remembered my social studies teacher who said once that the first human being to use a club wasn’t the strongest person in his tribe or the smartest. It’s just that the others didn’t need club, while he did. He needed a club more than anyone, to survive and to make up for being weak. I don’t think there was another human being in the whole world who wanted to disappear more than I did, and that’s why it was me that invented the pipe. Me, and not that brilliant engineer with his technical college degree who runs the factory.

I started crawling inside the pipe, with no idea about what to expect at the other end. Maybe there would be kids there without ears, sitting on mounds of marbles. Could be. I don’t know exactly what happened after I passed a certain point in the pipe. All I know is that I’m here.

I think I’m an angel now. I mean, I’ve got wings, and this circle over my head and there are hundreds more here like me. When I got here they were sitting around playing with the marbles I’d rolled through the pipe a few weeks earlier.

I always used to think that Heaven is a place for people who’ve spent their whole life being good, but it isn’t. God is too merciful and kind to make a decision like that. Heaven is simply a place for people who were genuinely unable to be happy on earth. They told me here that people who kill themselves return to live their life all over again, because the fact that they didn’t like it the first time doesn’t mean they won’t fit in the second time. But the ones who really don’t fit in the world wind up here. They each have their own way of getting to Heaven.

There are pilots who got here by performing a loop at one precise point in the Bermuda Triangle. There are housewives who went through the back of their kitchen cabinets to get here, and mathematicians who found topological distortions in space and had to squeeze through them to get here. So if you’re really unhappy down there, and if all kinds of people are telling you that you’re suffering from severe perceptual disorders, look for your own way of getting here, and when you find it, could you please bring some cards, cause we’re getting pretty tired of the marbles.

"…cause we're getting pretty tired of the marbles" - there's the Keret voice at its most typical (Note also that "Could be." in paragraph six). Most of Keret's stories work in this fashion. People are stressed-out and long for diversion or escape, reality melts seamlessly into the fantastical, and everything proceeds swiftly in a inexorable fashion like a dream, held together by the rise and fall of the speaking voice. If there are deeper meanings to be found in these bagatelles, then it is we who have to do the work of finding them. Here are some more brilliant Keret stories: "Shooting Clint", "My Lamented Sister", "Island Getaway", "The Nimrod Flip-Out", "Stupor In Our Time", and one curious tale in which we find the writer, or character, Etgar Keret in Moscow, being plied with drink by his hosts till he passes out.

But Keret's not just a sophisticated joker, a miner of the absurd. That is just his fictional persona, the vantage from which he opens out the world in his books. While his characters may long to escape from a troublesome reality, Keret himself has demonstrated a willingness to engage with that reality in all its complexity, especially the intractable Israel-Palestine problem and its many repercussions. Reading his essays, I was struck by the lucidity, moral force and breadth of reference of pieces like "The Sins of the Few", in which he protests against a decision by academics in England to boycott Israeli institutions over the Palestine issue, and "The Way We War", a recent essay in the New York Times on the Israeli government's strikes on Lebanon. Keret writes of Israel's new war:

Suddenly, the first salvo of missiles returned us to that familiar feeling of a war fought against a ruthless enemy who attacks our borders, a truly vicious enemy, not one fighting for its freedom and self-determination, not the kind that makes us stammer and throws us into confusion. Once again we’re confident about the rightness of our cause and we return with lightning speed to the bosom of the patriotism we had almost abandoned. Once again, we’re a small country surrounded by enemies, fighting for our lives, not a strong, occupying country forced to fight daily against a civilian population. 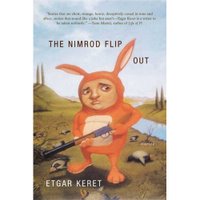 Keret's new book of stories The Nimrod Flip-Out appeared earlier this year. An archive of his pieces for the journal LA Weekly can be found here. He speaks at length about his stories in a very good interview conducted by the radio-show host Ramona Koval here. The blogger Lisa Goldman has a post on meeting Keret here. A review of Gaza Blues, a literary collaboration between Keret and the Palestinian writer Samir El-youssef, follows soon.
Posted by Chandrahas at 11:00 AM

I am glad you have written about Etgar Keret. I was given his "The Nimrod Flip-out" a few months ago, to tide me over a personal disaster. Since I have fallen out of the habit of reading ficition conscientiously, it speaks very highly of Flip-out's quality that I couldn't put it down in the weekend I started on it. Keret needs to be more widely known, and read in these best of times & worst of times.

Nice blog.
Thanks for this post about Etgar Keret. I'd never heard of him. I read Pipes and now I feel like reading more of his work.

Those who love Keret (and what's not to love) can find an excellent interview with him in the Believer magazine issue of April 2006. The interview is available online at http://www.believermag.com/issues/200604/?read=interview_keret.

That extract was just brilliant. I think I'm going to grab a Keret book. I love complicated one-upness on most of the (silly or not) seriousness in the world. (Kind of like Monty Python. Sadly, MP go overboard sometimes). On similar lines, there's Walter Moers, who I'd say crazily, brilliantly creative. You'll choke on your own laughter.

I just heard one of his stories on This American Life. His uncomplicated and direct style has a way of cutting directly into your heart and mind. (in a good way). Thanks for the post.