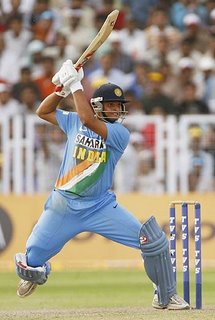 As the cricket season is due to end shortly, I'm making up for some slack months by writing a few pieces on players who've caught my eye. I've put up a post today on Different Strokes on the rising star of Indian batting. It's called "The supremely light feet of Suresh Raina", and here's an excerpt:

A great many of the batting artists of our age - Virender Sehwag, Damien Martyn, VVS Laxman - bat in a way that makes us admire the work of their hands rather than their feet. Batting was traditionally was thought to begin with, and indeed rest upon, a batsman's footwork. But the thickness and striking force of modern-day bats sometimes makes precise footwork redundant. It has been a pleasure, then, to watch the two splendid half-centuries made over the last week at Faridabad and at Goa by young Suresh Raina, and to observe how much his batting owes to his supremely light feet.

Also coming up on the Middle Stage over the next two weeks: pieces on Kiran Nagarkar's new novel God's Little Soldier, Hamid Ismailov's The Railway, and Alberto Manguel's With Borges.
Posted by Chandrahas at 10:27 AM

I agree that Raina is a very attractive player off the front foot, but whether or not he ends up as a more successful player in the longer form of the game than Yuvraj will depend a lot on his game off the back foot.

I've yet to see him tested against pace and bounce that's not in his half of the wicket and if he can handle that, then I'd be tempted to agree with you. But for the moment, I still consider Yuvraj to be our best option as a middle order bat in the future. He may have the Goweresque tendency to lazily waft outside off, but his ability to cut, pull and take on most short deliveries might keep him a rung or two above some of the Indian batsmen he plays alongside later on.

This was once a regular blog but, after six said...

I tried to post this on the Surfer but kept getting an error:

Nicely written. And you're right, he could become a very succesful Test batsman. But one of the things that has stood out for me in Raina's Ranji season (and his overall career stats as well) is the low conversion rate of 50s into 100s. I know it's early days yet, but a high conversion rate is a hallmark of the top Test players. I wonder if Raina is hungry and ruthless enough...or, like the new incarnation of Yuvraj, does he have to experience failure first?