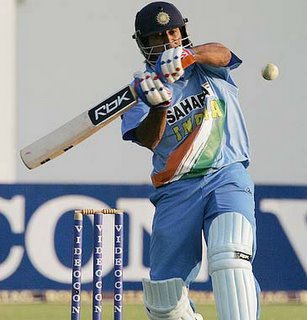 Mahendra Singh Dhoni is 24, hails from a part of India that has produced only a handful of Test cricketers, has a face a sculptor might have fashioned, wears his hair shoulder-length and with golden tints, drinks a litre of milk a day, loves fast bikes, keeps wickets as handily as any gloveman in the country, and smites the cricket ball as thrillingly as any batsman in the world. His three centuries at international level thus far have each touched a level of incandescence that batsmen sometimes achieve only once in a lifetime. These days his arrival at the crease is accompanied by a palpable rise in the temperature.

In twelve months Dhoni has moved from a virtual nonentity to one of the country's most feted cricketers - not easy in the country of Tendulkar, Sehwag, Dravid, Ganguly, and Pathan. Last month Kapil Dev, perhaps seeing in Dhoni some traces of his own limber, lashing batting style, went as far as to call him his "hero". Two weeks ago Pakistan's president Pervez Musharraf, whose usual sphere is the work of statesmen, nations, and other such serious things, was drawn into words of praise for Dhoni's hair. The man clearly has a strange and unpredictable effect on people. Among all India's Test wicketkeepers, only Farokh Engineer can have matched him for dash and brio.

Dhoni hails from Ranchi in Bihar, in the east of India, but he now plays Ranji Trophy cricket for Jharkhand, India's newest state - it was carved out of Bihar in November 2000, eleven months after Dhoni made his first-class debut. His story is in fact representative - while in the past a large percentage of Indian players were schooled in cities with flourishing cricket cultures like Bombay, Delhi, Madras, and Bangalore, increasingly they come from small towns and exhibit a healthy skepticism towards traditional orthodoxies. In his early years in domestic cricket Dhoni’s batting style was a little windy, hit-and-miss. But by 2004 he had learned to temper his game. Once he had displaced Dinesh Kaarthick in India's one-day line-up, he did not need much time to rest his case.

Sent up the order for the first time in a one-day game at Visakhapatnam last April against Pakistan, Dhoni made a stirring 148, driving and cutting ferociously on the up and haring down the pitch to hit the spinners over their heads. In the sapping heat no detail was revelatory of his desire to make his presence felt so much as his frenetic running between the wickets. Nor was he found wanting in invention. The Pakistani medium-pacer Abdul Razzaq was left shaking his head in disbelief after Dhoni suddenly went down on one knee and lap-swept him for four.

An even more remarkable performance was to follow five months later in a game against Sri Lanka. India were set a target of 299, and Dhoni came in at the fall of an early wicket. He began scrappily, but every so often a hit would fly clean out of the field, and he quickly reached fifty. He settled down when the field was set back, and kept motoring on. Again, hunting slow bowling down to the pitch of the ball – like Virender Sehwag, Dhoni believes that spin bowlers are to be dismissed from sight - he tore the Sri Lankan bowling to pieces. By the time he finished off the game with his tenth six he had amassed 183, the highest ever score by a batsman in a run-chase.

It is sometimes possible to locate the exact moment when a batsman provides convincing proof of his mettle. Last month Dhoni earned his spurs in Test cricket with a spectacular maiden Test hundred to help save the Faisalabad Test against Pakistan. Coming in to bat with India still over three hundred runs in arrears in the first innings, Dhoni found himself assailed by Shoaib Akhtar in the middle of a furious burst. The seventh ball he faced was a screaming bumper. For a split second it looked as if it had him pinned, then Dhoni's bat appeared as if from round a corner and hooked it off his eyebrows for six. And then he was off, careering to fifty from only 34 balls and his century from 93.

Dhoni's runs in Test cricket this season, coupled with Irfan Pathan's improving prowess with the bat, have massively boosted India's already formidable batting. And in one-day cricket he has been India’s most influential batsman in the last year. He now averages nearly 54 from 35 games at a strike-rate of better than a run a ball, and the most recent ICC one-day rankings for batsmen placed him at No.3 in the world.

There is something pugilistic about Dhoni's air at the crease, about the way he skips up and down between balls and sometimes cuffs his gloves together before taking guard. The extravagant theatricality of his strokemaking extends all the way to his follow-through, in the way he almost sweeps himself off his feet when driving off the back foot or pulling and hooking. Like Adam Gilchrist, to whom he has been instantly compared, Dhoni exudes an intense restlessness with the bat in hand. Both are instinctive shotmakers willing to take chances in order to score quickly and prevent the opposition from closing in around them. Both can turn a game around in half an hour.

There are still some rough edges to Dhoni's cricket. Because he sights the ball so early and goes so hard at it, he is vulnerable to the good-length delivery leaving him off the pitch. And while his keeping has shown steady improvement - he was one of the first in the Indian team to wholeheartedly embrace Greg Chappell's new ideas and work ethic - he still has some way to go before his work to slow bowling reaches the level of the last Indian wicketkeeper to keep outstandingly to spinners, Nayan Mongia. Surprisingly, in a land of chirpy wicketkeepers, he is fairly quiet behind the stumps. In front of them his booming bat does all the talking he needs to.


I also had the good fortune of watching live Dhoni's maiden international hundred against Pakistan at Visakhapatnam last year. Here is my piece from last April about that innings, "A Man Possessed".
Posted by Chandrahas at 8:54 AM

Not bad, but with due respects not upto your usual (extremely) high standards. Maybe I was expecting more insights rather than just a biopic. But I guess writing for a audience who may not be aware of Dhoni to same extent as an Indian, you had to start from the scratch.

All said and done, a good read.

Agreed on almost every front. I feel that I must add a couple of other points though.

I recently wrote a piece on my own blog about Dhoni's temperament.

The daring strokeplay that he brings to the wicket has everyone waxing enthusiastic, but I've seen very little said about Dhoni's own behaviour at the wicket. He seems to possess a rare trait in batsmen that are as attacking: he doesn't seem to get too carried away.

You'd expect someone who plays with such a carefree manner and goes after the bowling in such a destructive manner to lose his wicket a fair bit, rather than have it taken away. When he's set though, he rarely throws it away - I pointed out his phenomenal record of not-outs when chasing, where he's often cut loose but shown enough restraint to see the job through to the end - opting for a 70 not out off 60 balls, rather than a 60-and-out off 35. It's one major difference between him and Gilchrist; who I've found often culpable of throwing his wicket away at a bad moment, after getting a little too carried away with his aggressive strokeplay.

I'm glad though that you pointed out his enthusiasm between the wickets. He's among our best runners, up there with Kaif, Yuvraj and Tendulkar. Now I just hope he doesn't get swept away by the waves of hype that the media are making and will continue to make, and remains injury free.

Confused - You're quite right. There are some things in this piece which both you and I already know. But as you correctly guess, I was writing primarily for a set of readers who who don't know much about his career thus far. So I had to sketch in a bit of background. In that sense the earlier piece on Dhoni which I link to at the bottom of my post is probably a more interesting piece.

And Salil - those are some excellent observations. For someone to take so many risks and yet be so hard to dismiss is a mightily unusual trait. You're quite right - we've never had very many good finishers in one-day cricket. People like Ajay Jadeja and Robin Singh were far more fallible than Dhoni has been thus far. Dhoni's mixture of excitement and composure really is something new and strange.

Yes, it's something that's quite rare to see in international cricket. I do feel you should have pointed it out in the column though.

Most people unfamiliar with Dhoni might have the idea that he's more a slogger, less a proper batsman. That's the picture most of the media paints, focusing too much on his abilities to belt the ball ten rows back and to take an attack apart, while ignoring his calm performances under pressure.

All indians are genius or just the majority?

Just the majority, I believe.

Dhoni hails from Ranchi in Bihar, in the east of India, but he now plays Ranji Trophy cricket for Jharkhand

Ranchi is in Jharkhand. So the "but" you used may be of no consequence. I just wanted you to know because on reading this, I get the impression that you believe Ranchi is in present day Bihar.

Dhoni's forehand-like straight drives are a sight to behold, not from an aesthetic point of view, but for the sheer power with which they are hit and are completely unorthodox. We have two batsmen whose batting is as original as it can get - Sehwag and Dhoni.

Can't help but agree Dhoni is like a whoosh of fresh air. Not just because of his batting per se, but his temperament and apparent unflappability. But (salil, and chndrahas), one will have to say it is early days yet.
I would not want to be the doomsayer, but lets wait awhile before pronoucning him a better finisher than those chaps who were relatively less blessed in terms of support resources: Jadeja and Robin Singh.

If anyone can fathom that comment written at nearly 2am, do respond:)