The world of Bibhutibhushan Bandyopadhyay 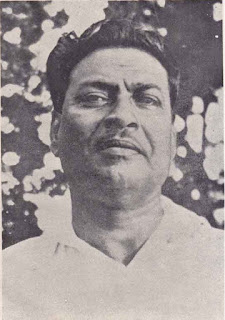 Some writers of fiction remain a presence within their stories, and one is palpably aware of their voice interpreting the world of their characters. Others have the great gift of being able to dissolve themselves into their creations so that, after guiding the reader by the hand for a little while, they suddenly appear to have vanished into thin air. Where have they gone? Their characters, like unruly tenants, have taken over the story: the unfolding of the story's events is presented as if filtered through their consciousness, not that of an observer from outside the action. The total communion with the world of a character that this provides is one of the greatest satisfactions that a reader of fiction can experience.

This capacity for narrative empathy, for depicting a scene the way a character might see it, is everywhere apparent in Bibhutibhushan Bandyopadhyay's A Strange Attachment and Other Stories, and this, combined with Bandyopadhyay's many other qualities, make this volume one of the most satisfying works of Indian fiction to appear in English translation in years - a kind of late gift, like a parcel arriving in the post many years after it was sent, from the author of Pather Panchali now dead fifty-five years.

Bandyopadhyay allows his narrative voice to be coloured by his characters's point of view most clearly in his stories about children (whose way of looking at the world, as those who have read the story of Apu and Durga in Pather Panchali will know, he could reproduce with remarkable fidelity). In the story "Dalu Gets Into Trouble", a huge lumber boat drops anchor at the village of a small boy, Dalu, and his younger brother Santu. Spellbound by the boat, the two brothers spend hours everyday gazing at it. One day one of the sailors invites them aboard the boat, but much as he wants to go Dalu demurs, worried that someone will see them in broad daylight and tell their mother. He decides that they will come back after sunset, under cover of dark. Bandyopadhyay tells us:

Santu wasn't overjoyed at this new plan. How could anyone dare to go down to the river's edge after dark? What about the witch living in the tamarind tree on Cinte the Bagdi's land? She pounced on little boys and dragged them to the very tip-top of the tree. No, sunset was a bad time of day. Santu told his brother his fears.

Bandyopadhyay's courtesy towards his character here lies in the way he imports Santu's concerns into the narrative without any indication that these are specifically Santu's thoughts. The questions troubling Santu are pressed upon the reader as if they are of vital importance, which of course they are to the boys. And later when the two boys ask the sailors what kinds of things they have seen on their travels and are told of "sharks, crocodiles, two-headed snakes, even red-faced monkeys and double-crowned palm trees", we share their wide-eyed wonder because we have become so accustomed to seeing things from their perspective. Here we see fiction authentically carrying out its pledge to the reader, which is to give us new eyes.

Bandyopadhyay had a marvellous comic sense, and he could write a very swift, light-footed prose that beautifully expresses this sense of comedy in human affairs. In the story "Haridas, Released Soul", the schoolteacher Haridas is sorely plagued by the cares of worldly life - an inadequate salary, a family pestering him with their wants, a headmaster dissatisfied with his work - but cannot see how he can free himself of these bonds. The narrator tells us that 'The Lord heard Haridas' prayer' and proceeds to tell us how. Every sentence in this passage gives off comic sparks:

One day Haridas caught the third grader Shripati Kundu reading a book under his desk. Twice Haridas called him to order. 'Hey, what's going on there? None of that. Do your sums. Here, add this."
But why should Shripati do his arithmetic, when on that very day he had been sent by the Lord as a messenger to the poor Haridas, beleaguered by the trials of earthly existence? […] Shripati paid no attention to Haridas; he went right on reading the book under his desk. Haridas did not scold him a third time. He got up from his chair and snatched the book away, not forgetting to give Shripati's ears a good twist on his way back to his desk. Curious, he opened the book. He was expecting a drama or a novel, or at least a good ghost story. But that was not to be. The name of the book was The Hero's Voice; its author was Swami Vivekananda. Haridas had never paid much attention to religion, but he did know about Vivekananda. He kept the book, thinking he might have a look at it some time later.
The next day was Sunday. Haridas didn't have to go out and give private lessons. He relaxed with a cup of tea and then picked up the book. The more he read the more interested he became. What was all this? I am He. I am the Lord. I am Brahma. I am the Great One.
What noble, majestic words! What exalted thoughts, reaching into the heavens like the lofty mountain Himalaya! Slowly, very slowly, the school master Haridas began to change. His head stretched up until thud, it bumped right into the vast empyrean! His heart and mind glowed with the light of an ineffable intuition, known only to Haridas himself. Haridas had become the ageless, deathless, eternal soul! The Lord and he had been walking hand in hand through countless aeons. Haridas was He; Haridas was the Omniscient One, Haridas was the Divine Lover; Haridas was the Great Hero.

Consider how skilfully the narrative communicates first Haridas's dashed expectations ("He was expecting a drama or a novel, or at least a good ghost story. But that was not to be") and then the rapid swell of his thoughts as his mind is engulfed by the message of The Hero's Voice, all building up to a booming crescendo. Just as it is the new convert who preaches with the greatest zeal, so here we have the comic spectacle of the initiate ascending up to the pinnacle of spiritual elevation in just a few moments.

Bandyopadhyay had roots in both village and city. In Phyllis Granoff's masterful translations, the stories of A Strange Attachment communicate the beauty of village landscapes and the variousness of nature's bounties but also of the thrill of the world fashioned almost entirely by man, the excitement of bustling crowds and shops and streets. His characters variously reflect Bandyopadhyay's openmindedness - that is to say, they do not suffer from that failing which sometimes affects the created beings of short-story writers, which is the fault of being too similar, of wanting the same kinds of things.

For instance, the protagonist of "Uncle Bhandul's House" lives all his life in rented accommodation in the city and invests all his savings in constructing a house in his native village, the place he loves most. So slow and laborious is this process that the narrator of the story grows up from a little boy into a man in that span of time, yet Uncle Bhandul carries on doggedly, intent on returning one day to his own house in his own village. But Canvasser Krishnalal, the hero of a story by that name, has spent all his life as a travelling salesman in Calcutta and loves the city ardently. When he loses his job, his condition becomes so wretched that he is thrown out of his boarding-house and has to return to the scrap of land his family owned in the village. He quickly grows disgusted by village life ("Krishnalal had never spent much time in the village before. The people were all uneducated; they didn' even know how to talk to each other politely. They didn't drink tea; in Calcutta even the beggars all drank tea. Everywhere you looked was mud and jungle." Here again we see Bandyopadhyay talking in his character's voice about the same village life that, in another story, he would describe with such affection!). Finally Krishnalal flees back to the city: "If he was going to starve to death, it might as well be in his beloved Calcutta."

The best reader that Bandyopadhyay ever had was the great film director Satyajit Ray, who fashioned from Bandyopadhyay's novels Pather Panchali and Aparajito the films now known as the Apu Trilogy. Coincidentally, one of Ray's books, Speaking of Films (first published in 1982 as Bishay Chalachitra), has also just been translated from Bengali into English for the first time. Speaking of Films contains several paragraphs' worth of acute commentary on Bandyopadhyay's work. At one point Ray advises aspiring scriptwriters to read Bandyopadhyay and note his wonderful ear for lifelike speech: "His lines fit the characters so well, they are so revealing that even when the author provides no physical description, every character seems to present itself before us simply through the words it speaks." And as an illustration of the "gold mine of cinematic observation" to be found in Bandyopadhyay's work Ray cites the story "Puinmacha" (which appears in A Strange Attachment under the title "The Basella Trellis"). Ray writes:

Annapurna's daughter Khenti has just got married, and it is now time for the bride to depart. The palki is resting on the ground with the bride and the groom in it. Annapurna, whose heart is torn by anguish, glances at the palki and notices - I translate - 'that the end of Khenti's modest red baluchari has trailed out of the palki, and is nestling against a drooping cluster of medi flowers by the bamboo fencing'.
In its context, this is a heart-rending detail, and a perfect film close-up of the kind described by Eisenstein as 'pars pro toto', part standing for the whole.

Indeed, Bibhutibhushan’s sympathy is so vast that each person touched by the roving lens of his narration seems momentarily to turn into the protagonist of the story. The work of many great fiction writers seems somehow self-consciously literary, but not so with Bibhutibhushan, who prizes—and produces—narrativeness (a term used in literary theory), that mysterious quality of constant motion and confident verisimilitude that makes a reader forget he or she is reading a story. When we read Bibhutibhushan, we suddenly know exactly why we read fiction.

Posted by Chandrahas at 1:16 PM

Email ThisBlogThis!Share to TwitterShare to FacebookShare to Pinterest
Labels: Indian literature in translation

This is a marvelous deconstruction of a true genius of lndian literature, offered to us in an accessible whilst at the same time evocative way. l am indeed grateful and especially for the lead to Bibhutibhushan Bandyopadhyay's - 'A Strange Attachment and Other Stories' with an English translation.... at last!