Life winding down in Cather and Saratchandra

Many readers are familiar with a wrenching experience associated with powerful novels: that of coming towards the close, the last few pages, after which our fortnight- or month-long involvement with a set of characters and an imagined world (no less real for being imagined) will abruptly come to an end. Surely this feeling is more painful than, say, the news of the death of a distant relative or acquaintance. To postpone closure, we try to read more slowly, linger over every sentence, close the book for a while and drift into our own thoughts.

Often novels also enact this mood with respect to their protagonists. Many novels which portray aged characters, or people who have endured some great struggle, attain closure on a kind of diminuendo - a term from music meaning a diminishment of force or loudness, and in the case of novels a flickering and weakening of energies animating the work. 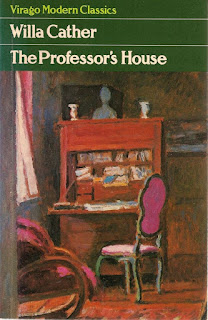 In the third and final section of Willa Cather's great novel The Professor's House (1925) we find the professor of history Godfrey St.Peter, a man in his fifties with a large family, suddenly feeling an immense weariness after having completed a project lasting several months, which is to write down whatever he remembers of the life story of a very dear, and now dead, student of his, Tom Outland. (That story forms the second section of the book, simply titled "Tom Outland's Story", and its effect is quite the opposite: it is of such force as to make the life blood of every reader throb more powerfully.) Alone at home while his family is away on vacation, he begins to behave in a highly unusual way:

All those summer days, while the Professor was sending cheerful accounts of his activities to his family in France, he was really doing very little. […] All his life his mind had behaved in a positive fashion. When he was not at work, or being actively amused, he went to sleep. He had no twilight stage. But now he enjoyed this half-awake loafing with his brain as if it were a new sense, arriving late, like wisdom teeth. He found he could lie on his sand-spit by the lake for hours and watch the seven motionless pines drink up the sun. In the evening, after dinner, he could sit idle and watch the stars, with the same immobility.

He begins to feel the imminent close of his life as an instinctive conviction, "such as we have when we waken in the dark and know at once that it is near morning; or when we are walking across the country and suddenly know that we are near the sea." A few days later he goes off to sleep in a room with a gas stove and a freak accident fills the room with gas fumes. Awoken by the smell, he feels strangely loath to switch the stove off, and drifts into sleep or unconsciousness again. Finally he is saved by the family's old maidservant.

And towards the end of Saratchandra Chattopadhyay's Srikanta (published in four parts from 1917 to 1933, eight years to either side of The Professor's House), Srikanta, the weak and sickly protagonist and narrator of the novel, is told by an astrologer that he is shortly about to go through a very bad time, a matter of life and death. His wife Rajlakshmi takes him away from the city to their village, hoping his health will improve. There Srikanta sees out the days in the same dreamy and desultory state as St.Peter:

I passed my days in reading and gazing out of the window at the hard blue sky and dun-coloured fields. Sometimes, I wandered about by the side of the canal or stood for a moment on the rickety bridge. But, more often, I sat at my table and put down on paper the strange and varied events of my life. I knew myself. I had little drive and less ambition. […] It was anough for me to be allowed to live. Sometimes, shamed by the energy and enthusiasm of the others, I would try to rouse myself, to break out of the inertia that had settled on me like a cloud. But, before I knew it, I was back again within its enveloping folds and was my weary, half-conscious, half-dying self again.

And a little later the news arrives that Srikanta's childhood friend, the Muslim poet Gahar, is seriously ill, allowing Saratchandra to extend this meditation on passing away. Even though he is ailing himself, Srikanta immediately sets out for Gahar's village, only to find when he arrives that Gahar has already passed away and been buried. Gahar' was a great lover of nature; now, walking through his courtyard and the rooms of his house, Srikanta remembers the last time he came to visit this house:

It had been spring then and the vines newly in bud. Now, nurtured by the new falling rain, they were laden with clusters of flowers. So many had been swept away by the wind, so many had fallen to the ground. I remembered Gahar's desire to give me some flowers and his frustration at the sight of the wood ants that crawled all over the trunk. I bent down and picked up a handful and felt it was my friend's last gift […] I had eaten and slept here so often in my childhood; I had played within these walls. I had fought and sparred with Gahar and heard stories from his mother. No one was left to share those memories. My roots were being cut away from me…

"My roots were being cut away from me…" - that is very powerful.

One feels that, although their behaviour is received with perplexity within their respective worlds, St.Peter and Srikanta would have been able to understand one another perfectly. As readers, we may find Cather deepens the meaning of Saratchandra and vice versa (as I once remarked while proposing the complementarity of a poem by Cavafy and a song by Gulzar).

And to return to where I started out, one might also venture that we feel distress at the state of characters like Srikanta and St.Peter so deeply because, subliminally, we tangle this sense of human life ebbing away with the extinguishing of another kind of light: that of the novel itself, and the break with a world in which we have invested a great deal of our lives and in fact partly helped create with our imaginations.

A previous post on Cather can be found here. And here is a marvellous essay on The Professor's House by Donald Lyons. Some remarks on Saratchandra's life, milieu and works can be found in this essay by Ranjit Gupta. I would welcome more links to essays on Saratchandra.
Posted by Chandrahas at 12:35 PM

I enjoyed reading your article, specially expressing the feeling when we reach to the end of the novel and our world together. The emptiness that followed.

Thank you also for introducing me to another interesting writer.

I just finished reading The Professor's House. My weakness in terms of appreciating nature became my handicap in terms of really understanding the book in general and Tom Outland's story in particular. However, I must say the language had a beautiful flow throughout the book. I felt that characters like Blake, Tom and St Peter had sensibilities which one wish to have in people but are extremely rare to come across today. It's strange that I felt this about Blake even though he sells their find to a German for money but there was clearly a lack of worldliness in him too with his shabby clothes and stay with an old woman, which is not explained. I guess it needs another read :) However, what really me pulled me towards Cather's writings is her descriptions of the West. One of my other favourite writers is Annie Proulx and I was trying to find a connection. But there's not much as far as The Professor's House is concerned