On Arundhati Roy's Walking With The Comrades

This review appeared last weekend in The Washington Post.

As India grows into its new economic might, it also oppresses and impoverishes its people in ways different from those of old. One might say that where once the sins of the Indian state were mainly those of omission — of being too supine and resource-starved to lift several hundred millions citizens out of a cesspool of poverty, illiteracy, malnutrition, and caste and gender discrimination — increasingly they are mainly those of commission, of conspiracy and corruption under cover of the motions and catchphrases of democracy. Even so, there remains a basic faith, even pride, among Indians in the warming narrative of “the world’s largest democracy” and its institutions.

For over a decade now, the writer Arundhati Roy has served as India’s most powerful and articulate dissident, tearing that broad consensus to shreds. Through a slew of acerbic and impassioned essays, speeches and books, Roy has attacked both the country’s religious right wing and the barons of big business, and excoriated the Indian state’s political, economic and military policy. At times, Roy’s uncompromising hostility, penchant for tendentious theses and juxtapositions, and appropriation of multiple causes have earned her as much notoriety as respect.

Walking with the Comrades, Roy’s new book, is a riveting account of the face-off in the forests of central India between the Indian state and the Maoists or Naxalites, a shadowy, revolutionary guerrilla force with tens of thousands of cadres. It is a battle over power, land, ideology, mineral riches, rights, ecology — a battle, as Roy sees it,“for the soul of India.”

The thickly wooded states of Chhattisgarh and Jharkhand in central India are home to millions of indigenous tribal peoples. Long neglected by the Indian state because of their inaccessibility and marginality, these areas gradually became the sylvan redoubt of a band of left-wing revolutionaries. These disenchanted and dreaming men and women are contemptuous of “bourgeois democracy” and committed to armed revolution, but have also dedicated themselves to working for and with the tribals to improve their lives. For decades, the Maoists have virtually run a parallel government in these regions.

But in recent years this uneasy equilibrium has been shattered, in part, by India’s booming economy. The tribals live atop lucrative resources: massive deposits of iron ore, bauxite and other minerals meaningless to them but coveted by mining companies. “Commonsense tells us,” Roy quotes India’s Home Minister P. Chidambaram as saying in a speech in 2007 at Harvard University, “[that] we should mine these resources quickly and efficiently.” As government and big business draw ever closer in India, the state has become invested in the displacement of tribal peoples — and the flushing out of the Maoists — so that mining companies can blast and burrow in these regions.

Worse, the current government has armed and paid groups of tribals to inform on and smoke out Maoists, setting into motion a gory cycle of killings and reprisals that has claimed hundreds of lives. In this new McCarthyite climate, even to be a Maoist sympathizer in India has become an act of treason.

Roy’s charge is that Operation Green Hunt — the name of the concerted military campaign against the Maoists — is actually a front for the economic pillage of the forests and the destruction of the livelihood and habitat of some of India’s most vulnerable citizens. Deep in the jungle, the old Gandhian methods — or what Roy calls the “pious humbug” — of nonviolence and noncooperation seem absurd. Roy contends that at the Maoist resistance, even if often sinister and inscrutable, has at least halted the disastrous march of big dams and mines where numerous democratic and nonviolent resistance movements have failed.

The book is strongest when Roy describes her days in the forest among the strategists and footsoldiers of the insurrection — a privilege accorded to precious few Indians outside the movement. She walks, eats and sleeps alongside a ragtag bunch of armed youth (“almost everyone’s gun has a story: who it was snatched from, how and by whom”) and weighs their testimonies and arguments. Even so, the book is less reportage than polemic. What is seen and heard, even though vividly narrated, is immediately stitched up with material from newspaper reports and books, or set in counterpoint to claims by politicians, journalists and idealogues, or layered into complex global theses. The book’s primary landscape is not the forest, but the writer’s own mind.

Roy manages over the length of a book — and this is the point of books in any complex debate — to open out a distinctive position that belies easy summary. Although she has been painted as one, she is no simple apologist for the Maoists, whom she sees as possessing “a single-minded, grim, military imagination.” Yet she sees them as “the most militant end of a bandwidth of resistance movements” being waged by Indian people for causes across the country. An alternative to the impasse, she suggests, requires “an imagination that is outside of capitalism as well as Communism.” The first step to that is to “leave the bauxite in the mountain.” Fruitfully skeptical and contrarian, Walking with the Comrades is a necessary book by one of India’s most distinctive voices.
Posted by Chandrahas at 10:54 AM 3 comments: 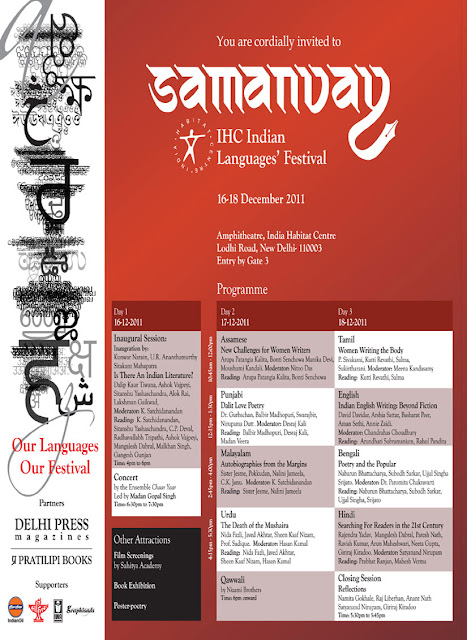 And the festival website with the full programme is here.
Posted by Chandrahas at 6:53 PM No comments:

On board The Caravan

I have a new job, one that requires me to break one of my own rules and report to office, although only once a month. I'm going to be in charge of the Fiction and Poetry section of The Caravan.

I hope every month to publish new and necessary Indian fiction and poetry in English and in translation, flanked occasionally by writing from other parts of the world.

Here are this month's selections: Feroz Rather's short story set in Kashmir, "The Last Candle", and Rabindra K Swain's poem "The Prime Minister" ("In the Prime Minister is the triumph/ Of the bird who himself does not eat/ But watches the other one take tiny pecks").

As with the selections in my book India: A Traveller's Literary Companion, I've appended a little note to each piece that describes what I think is striking about them.
Posted by Chandrahas at 9:09 PM 5 comments:

Falling In Love With The Novel

This essay appeared last week in The Telegraph of London.


In the autumn of 2000, I was a 20-year-old student in Cambridge, at home in the English language but new to England and the English. Producing dutiful but desiccated essays every week on regicide and gender-bending in Shakespeare, struggling meanwhile with the almost complete absence of rice and dal (“lentils”) in the British diet, I suddenly fell violently in love in an unlikely place – Galloway & Porter, a home for cut-price and remaindered books. Thankfully the object of my affections was willing. She was, to squeeze out the last of my metaphor, The Novel.

As with Shakespeare’s blue-blooded lovers, the vision of the novel I fell in love was inseparable from the name of a particular house. This was Christopher MacLehose’s magnificent Harvill Press, then on its last legs, soon to be bought up by Random House and reincarnated as the tamer Harvill Secker.
This encounter with the novels published by Harvill turned my relationship with the novel from one of deference to discovery. From the classroom, I knew of the English canon: Fielding, Sterne, Eliot, Dickens, Forster, Joyce and Woolf. If these novelists bored me a little, it was not because they were uninteresting, but because they were being given to me (I came to them much later, on my own terms).
But the beautiful tall paperbacks from Harvill seemed to me an alternative canon, put together by a mind in tune with the novel’s own roving spirit, its refusal to fit into neat compartments of nation and language. Here was a cavalcade of fantastic names from across European and South American literature: Bulgakov and Andrei Bitov, Lampedusa and Cortazar, Jose Saramago and Jorge Amado, Antonio Tabucchi and Haruki Murakami, with the occasional British firework like Henry Green.
Indeed, in a way that mirrored my own previous heartbreaks, these were novels that seemed to have lost hope in finding lovers, being sold at a pound or two apiece. From the glorious parade of their characters, narrative strategies, and formal play – every chapter on Alessandro Baricco’s Silk was no more than a page, but sometimes a single sentence in Saramago’s novels ran to more than that length – I took away an impression of a single amorphous spirit behind them all, a grand ur-Novel.

Empathetic and critical, veiled and direct, the novel seemed to suggest a complex position from which to inhabit and interpret the world, all the more powerful because not reducible to a single axiom or method. To be educated in novels was to be educated in many of the dilemmas and ambiguities and mysteries of life.

When, a few years later, I returned to India, this alternative education in the novel was to prove more useful than my classroom education in trying to make a map of the Indian novel (and eventually, in writing my own novels). Although the Indian novel has its roots in the English novel – it begins around the 1860s, a result of the colonial encounter – it very soon branched out onto its own paths, melting into the cultural memory and literary traditions of the more than two dozen languages widely spoken across India.

Like the European novel, I saw, the Indian novel was really a kind of continent; to read in it without an emphasis on translation was to confine oneself to only one country. Among my discoveries in translation was the Oriya writer Fakir Mohan Senapati’s limber and anarchic Six Acres and a Third, every bit as powerful today as it was when first published in 1902. Other great books of an Indian pantheon might include UR Ananthamurthy’s Samskara and Bharathipura (Kannada), Salma’s The Hour Past Midnight (Tamil), and the Bengali novels of Mahasweta Devi and Bibhutibhushan Bandyopadhyay.

Indeed, the values of the novel – individualism, scepticism, narrative depth, polyphony, empathy, truth-telling – seem to me to be in dialogue with the values of another ambitious project of Indian modernity: democracy. Both these projects invest similar kinds of trust in the individual, and take a similarly complex view of the relationship between liberty and responsibility. Democracy works through ideas and arguments, novels through stories. But the great novels, like democracy, represent a vision of justice.

Further, the novel’s native strengths seem to make it an ideal lens on India’s multiple narratives and long history of intercultural encounters. More than journalism or the cinema – both squeezed by commercial pressures – the novel seems the form most capable of absorbing India’s social and linguistic plurality, of not just describing but inhabiting from within the dozens of ways in which Indians make meaning.

In a culture where religion and society place vast pressure on the individual to believe in received truths, and advertising and the mass media now pour rivers of banality and manipulation into human brains, the novel is a reliable source of complex thought and an invaluable bastion of independence. For those seeking a layered and subtle account of India today, one very good place to find it is in a journey across the grand continent of the Indian novel.

And an older autobiographical essay: "On Not Coming Down From Trinity".
Posted by Chandrahas at 4:13 PM 6 comments: