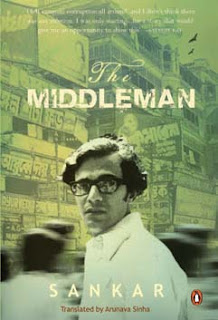 Even in a time of recession, most educated young Indians today inhabit a job market miles removed from the India of the decades preceding liberalization. But public memory is always short, and one generation’s shared experience often erases that of the previous one. The array of urban job options available today to the graduate or even the school-pass will probably ensure that in a decade we will have all but forgotten the moment in middle-class Indian life when, to quote a line from Sankar’s novel Jana Aranya “if you had a job you were blessed.”

Sankar’s novel – famously made into a film by the same name by Satyajit Ray on its publication in Bengali in 1973, but only now translated into English by Arunava Sinha under the title The Middleman – beautifully evokes a world of competitive examinations, newspaper classifieds, job interviews, family pressures, and nepotism. At the same time, we see the desperation of those left behind in the race for financial security, the respect of society, and marriage and family through the gateway of employment. In a short, charming afterword to the novel, Sankar reveals how he himself worked as a middleman in his impoverished youth, buying all kinds of goods cheap and then selling for higher. Although his novel describes the particulars of a time and place that may have now disappeared, its sympathetic portrait of human striving and shrewd understanding of the ways of the world make it at once a great novel of both business and family.

The protagonist of The Middleman is Somnath Banerjee, the youngest son of a retired judge. Unlike his two older brothers, who have done well for themselves and made good marriages, Somnath is a struggler, an unexceptional individual seeking a place in a world which has its own peculiar ways of judging merit. Although Somnath is badly off, his family is not in need of his income. His struggle is personal, not familial, and there are many supportive presences at home, including his tender-hearted sister-in-law Kamala (some of the best scenes in the book depict conversations between these two kindred hearts). Some others have it even worse, such as Somnath’s friend Sukumar, who must find a job urgently to support his large family. Sankar expertly depicts the fellowship of these two hopefuls, Somnath and Sukumar, but does not fail to remind us of their differences.

After numerous attempts at finding a job, Somnath realises that time is running out: “If he couldn’t become self-reliant now, he would no longer remain human.” On the advice of an acquaintance, he decides to go into business. The novel now leaves behind the world of the salaried (except for brief glimpses into the life of the luckless Sukumar) and moves across into the adjacent world of entrepreneurship. What is Somnath to buy and sell? How are contacts to be made and how is business to be generated? Can one hold to one’s own values in the world of commerce, or is one to fall in line with the rest? Sankar makes us consider all these questions through the figure of Somnath, and his portraits of small-time traders, speculators, and agents are vivid and memorable. Somnath realises that to succeed in such a world – which is, after all, the only world which has offered him an opportunity to be human, albeit a morally impoverished human – he will have to jettison some of his beliefs and compunctions. Here are the paragraphs in which Somnath first tastes the thrill of an income:

When Somnath brought up the envelopes, Mr Ganguly asked him to leave a few samples and the rates. He promised to get back to Somnath after checking their stocks.

The transaction was completed by five o'clock, and after deducting expenses three crispt ten-rupee notes sat in Somnath's pocket. His first ever income. An experience as breathtaking as first love. Suddenly, Calcutta had shed its drab hues and was glowing before his eyes. Unable to contain his excitement, he took out his wallet and counted the money again.

Back in his office, Somnath looked for Bishubabu, but was told that he was out of town on business. As soon as Adak arrived, Somnath ordered for sweets, eager to celebrate. Adak protested loudly. 'This is why Bengalis get nowhere with business. This is your first capital. You can't afford to waste it. Get it up to ten thousand first. Then I'll be the one demanding the sweets.'

Just as Somnath has two older brothers, so too Jana Aranya could be said to bear a familial resemblance to two novels that preceded it in the world of Bengali fiction. These are Sirshendu Mukhopadhyay’s Ghoonpoka (The Woodworm, 1967); and Sunil Gangopadhyay’s Pratidwandi (The Adversary, 1969), both of which were translated into English many years before it was. As their very titles indicate, these novels too are about the corrosion of traditional values and the alienation of the protagonist from society. But although it has had to wait the longest to be translated, Sankar’s novel is a more satisfying experience than the other two because of the excellence of its narrative craft.

Although it is written in a smooth, unornamented prose, the novel’s achievement is deceptive. One would have to draw a diagram of the plot to see how deftly Somnath’s encounters with the different people in his life, his shuttling between home and the world, are laid out. There is a heartbreaking tenderness about some of the family scenes, and then a powerful hunger and ruthlessness about the world of deals and commissions; yet these realms are not a pair of simple contrasts, and at times it appears that it is the family that is unreasonable and the world of commerce a better arbiter of worth.

Although Sankar’s language is naturally something that would not lose much in translation, Sinha’s skill is especially evident when it comes to his magisterial rendering of dialogue, which Sankar prefers to third-person narration as his narrative motor. This is transparently one of the greatest of modern Indian novels, and though it has crossed the borders of its language belatedly, its second innings is sure to be even longer than the first.

Sinha's two other translations of Bengali novels are Sankar's Chowringhee and Buddhadeva Bose's My Kind of Girl. His translation of Rabindranath Tagore's story "One Night" can be found here.

An archive of my essays on Indian fiction is here.

[A version of this review first appeared in Mint.]
Posted by Chandrahas at 7:56 PM

read another review on the same book at http://indianblogworld.com/2009/07/book-the-middleman/

Loved the movie and definitely look forward to reading the book.

It's interesting that the title - instead of being translated from 'Jana Aranya' - is borrowed from Ray's film's English title. This sudden Pan-Indian drooling over Shankar is amusing because for serious Bong readers he's more potboiler, less litracha. Of the reams after reams he's churned out, 'Chowringhee', 'Jana Aranya' and his debut 'Kato Ajanare' are the only ones to have managed to pass the Bong lit-mus test. Having read 'Chowringhee' both in original Bong and in English translation, I was surprised at how much better the latter is.

While opinion about a famous novel may vary, one has to credit Sankar with one thing, he never pretended to be writing for the literary intelligentsia, which, unfortunately many of his cotemporary (and present) Bengali authors did. He has a kind of simple, direct (unornamented prose, as Chandrahas rightly said) writing to which an average Bengali could readily connect, resulting in best sellers out of the reams after reams he churned out. Contrast this with some of the famous authors who spawned high thought stuffs (that contained pages after pages of stream of consciousness till such time you loose your own) which remained at the selves for months before they are taken off and sent back. And Sankar is certainly not apologetic about his success. The kind of journey he made from the penniless boy of Shibpur, Howrah to where he is today with the translation of his book being inaugurated at the London Book Fair speaks volumes of an achievement which many of his critics would love emulate in their lives. He chronicled the citylife (as opposite my favourite Bibhutibhusan Bandyopadhyay who was a minstrel of the rural Bengal, and who incidentally wrote in the same simple, direct manner, and some of whose books remain mileposts in the annals of Bengali literature) speaking from his real first hand experience which Ray found suitable for two films of his Calcutta trilogy: Seemabaddha (1971) and Jana Aranya (1975).

Dear All - Thank you for your comments, and my apologies for taking so long to respond. I am taking the liberty of placing my own book above those of others for a brief while, and of following it out into the world.

Saikat: you're right in that sometimes a work can, paradoxically, seem better in translation than in the original. As I am not Bengali (to my shame, I cannot even read my native Oriya) I have no means of confirming your diagnosis, but we are agreed, I think, on the fact that The Middleman in English seems a sublime achievement. I agree with you in disputing the translator's choice of title; the original is so resonant (and so familiar to the Indian public because of Ray's film) that he might even have chosen not to translate it at all.

Ranjan: I am with you in your affection for both Sankar and Bibhutibhushan Bandhopadhyay. As you say, Sankar is less self-conscious that some other better-known novelists, and this is why he seems to avoid the trap of intellectualising every small problem and situation, which is what bogs down some other Bengali novels I've read in translation.

I think that Sankar knows that a story is also a kind of thought; it does not need an additional layer of explicit thinking on top of it. One wishes that more novelists paid attention to this truth or followed its implications through.