After two days of being immersed in the misty platitudes and dubious certainties of Paulo Coelho ("Everything in life is an omen"; "Love simply is"; "When you want something, all the universe conspires in helping you achieve it" - yes, these are the deeps in which a weekly book reviewer can sometimes flounder) I found myself heartily sick of the words hope, love, destiny, and soul, and desperately needed something wicked and cynical just to restore my faith in humanity. Poking amongst my books, I found something that can be prescribed universally as a tonic against the literature of self-help and soul-ascent: Ambrose Bierce's dazzling The Devil's Dictionary. 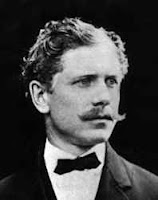 Bierce (1842-1914) spent most of his working life as a journalist, a breed permanently inclined to thinking the worst of humanity. Other factors that might have influenced his sardonic view of human nature was the fact that he was the tenth of thirteen children, all with names beginning with the letter "A", and the American Civil War, which he was to write about in many short stories and in the memoir What I Saw of Shiloh.
But it is for The Devil's Dictionary (1911) that Bierce is remembered today. It began in the eighteen-eighties as a weekly newspaper column, each piece containing fifteen or twenty humorous definitions of words. Some definitions were only a sentence long, while others stretched to two or three paragraphs. Bierce's strong, vigorous prose style - one attribute in a writer's work that can never dates or go out of fashion - and savagely misanthropic wit made for a winning combination. When his work was published in book form in 1911, he addressed it to "enlightened souls who prefer dry wine to sweet, sense to sentiment, wit to humour and clean English to slang".

The pleasure of reading The Devil's Dictionary is the way Bierce recasts the meanings of words not as they exist in a conventional dictionary, but as they are realised in human affairs. "Acquaintance, n. A person whom we know well enough to borrow from, but not to lend to. A degree of friendship called slight when its object is poor or obscure, and intimate when he is rich or famous." Distance is understood as "The only thing that the rich are willing for the poor to call theirs, and keep." And no one has ever bettered his definition of Present as "That part of eternity dividing the domain of disappointment from the realm of hope".
Often Bierce's definitions wittily suggest that things are merely a function of perspective. Accuse is a verb which means "To affirm another's guilt or unworth; most commonly as a justification of ourselves for having wronged him", and a Bore is "A person who talks when you wish him to listen". That last definition nicely suggests that where there is one bore, there are actually two.
Sometimes Bierce used his definitions as springboards for further inquiry, such as the charge of ahistorical writing in literature in this entry on "handkerchief":

Handkerchief, n. A small square of silk or linen, used in various ignoble offices about the face and especially serviceable at funerals to conceal the lack of tears. The handkerchief is of recent invention; our ancestors knew nothing of it and intrusted its duties to the sleeve. Shakespeare's introducing it into the play of "Othello" is an anachronism: Desdemona dried her nose with her skirt…

And elsewhere he plays upon the idea that all emotions are a result of chemical reactions in the body in his entry on "Heart":

Heart, n. An automatic, muscular blood-pump. Figuratively, this useful organ is said to be the seat of emotions and sentiments - a very pretty fancy which, however, is nothing but the survival of a once universal belief. It is now known that the sentiments and emotions reside in the stomach, being evolved from food by the chemical action of the gastric fluid. The exact process by which a beefsteak becomes a feeling - tender or not, according to the age of the animal from which it was cut…; the marvelous functional methods of converting a hard-boiled egg into religious contrition, or a cream-puff into a sigh of sensibility - these things have been patiently ascertained by M.Pasteur, and by him expounded with convincing lucidity. […]for further light consult Professor Dam's famous treatise on Love as a Product of Alimentary Maceration.

A very pretty fancy - Bierce was the scourge of those who entertained very pretty fancies. Even when you grow used to the character of his wit, he is still capable of surprising you, as in his definition of Painting as "The art of protecting flat surfaces from the weather and exposing them to the critic", which manages, like the entry on Bore, to take down two targets with one shot.
Explaining the allure of the figure of Satan in Milton's epic poem Paradise Lost, William Blake remarked that "The reason Milton wrote in fetters when he wrote of Angels & God, and at liberty when of Devils & Hell, is because he was a true Poet, and of the Devil's party without knowing it." Bierce was of the Devil's party too, but he knew it, and was proud of it.
The Devil's Dictionary can be read in full here.
And old posts on two great Indian satirical writers: Fakir Mohan Senapati and Parashuram.
Posted by Chandrahas at 3:47 PM

Not at all useful as a review or as a critical comment but since you were not even trying to do those things, I pompously label it -- enjoyable! Did you read the book in one (or two) sitting(s)? Or is it the sort which one would read over a period of many days?

Yes, it is quite an amazing book. I came across it some years ago while browsing the website of Project Gutenberg. Here is the link, in case you want a ready reference:
http://www.gutenberg.org/etext/972

I hold no brief for Coelho, but I'm just airing some thoughts aloud: you say 'dubious certainties of Paula Coelho' and much though I enjoy Bierce, he also seems to be filled with a kind of certainty; which leads me to ask, can any kind of certainty be anything but dubious? I'm reminded of a screening we had of Rashomon when we were in college. So many people felt that the 'true' version was the most cynical one, where the characters are shown to act from the basest motives.

Of course, when Szymborska writes about the soul I can handle it; when Coelho does, I emphatically cannot!

You forgot to mention your post about Faith and Frivolity by the way.

Space Bar - Some certainties are certainly more dubious than others, Coelho's being a case in point, and it would be intellectually lazy of us not to distinguish between them.

Also, Bierce is just having fun - he is really mock-serious, while Coelho, as far as I can tell, is absolutely earnest. To allude to the book you mention, one might say Coelho is an example of a bad kind of faith, and Bierce of a good kind of frivolity.

Anirudh - I don't think it's the kind of book you read at one go, any more than you would read a real dictionary. You keep it conveniently at hand and dip into it from time to time.

apropos of which, bierce's definition:

FAITH, n. Belief without evidence in what is told by one who speaks without knowledge, of things without parallel.

I'm a long-time lurker on this blog. Never really got around to posting a comment though I've enjoyed many of your previous posts.

While some of the definitions in the "The Devil's Dictionary" may seem overly pessimistic/cynical/ misanthropic many of them are incredibly perceptive and expose the many absurdities of society.

for eg: OATH, n. In law, a solemn appeal to the Deity, made binding upon the conscience by a penalty for perjury.

Gilles - Good to see that you've finally owned up to your deeds.

If Bierce had been alive today, I wonder how he'd have defined Blog, noun.